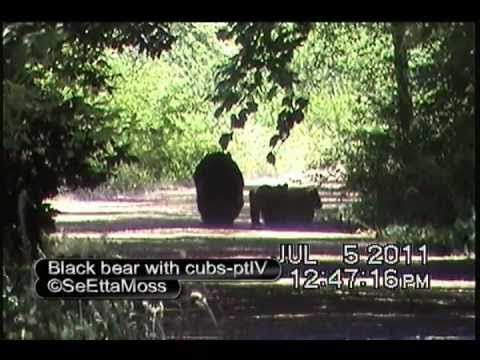 This is another video clip of the Canon City,CO bear family. In it the momma bear continues leading her triplet cubs down the Canon City, CO Riverwalk trail (this is easier for not only adult bears but especially cubs to walk on just as trails are for people). As they walk by some overhanging limbs that apparently have something good to eat, first one then the second and finally the third cub grab a bite as they continue after their momma (like a drive-in for bears). SeEtta 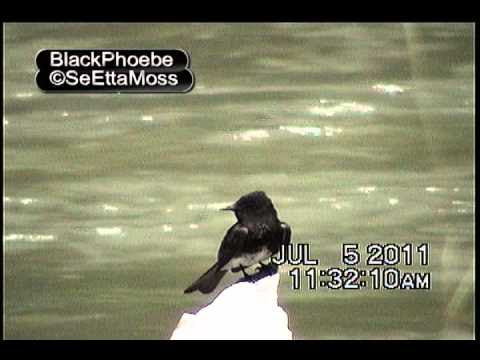 This is the apparent male Black Phoebe that has been paired most recently with a probable female Eastern Phoebe. They nested in a culvert across the Arkansas River from the Canon City, CO Riverwalk and are currently feeding at least one offspring that is apparently a BlackXEastern Phoebe hybrid fledgling. This Black Phoebe is, like most the Black Phoebe males I have observed, an excellent mate and father. He stayed brought food to the probable Eastern Phoebe female when she was on the nest then stood guard nearby. He has also provided food to the offspring in the nest and since it/they fledged plus tends to stay close by, chasing off other birds who come too close. Here he has flown across the river to feed and now takes a break by the river as he surveys the area. Did you see it catch some small insect and gobble it down at the beginning of this clip? SeEtta
Post a Comment
Read more

Black bear with cubs: walking on down the trail 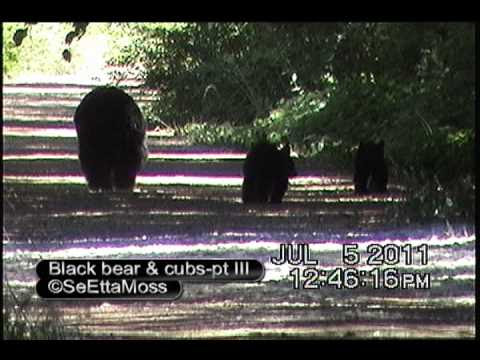 The black bear momma and her cubs come out from the forested area where they were feeding and continue on down the Riverwalk trail (after they disappeared behind the trees, I retreated a ways back on the trail just in case she decided to return back down the trail the way they-and I-had come and to make sure I didn't crowd them). The cubs investigate and play a little as they follow mamma, stopping to smell the roses (or more likely some berries), then running to catch up. The cubs sure look awful bow-legged, more so than momma. BTW, they are now at a safer distance so I am not moving away from (and knocking into) the camcorder to check on them with my binoculars so the video doesn't jump as in previous clips (can't really see as well through viewfinder and when she was close I kept monitoring her frequently). SeEtta
Post a Comment
Read more 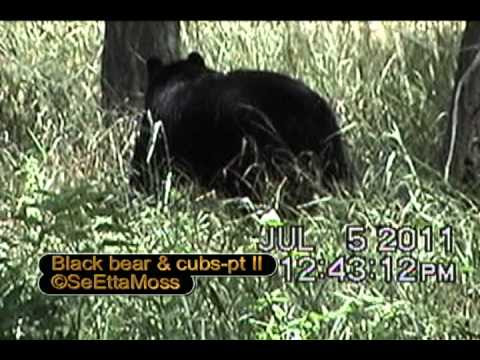 This is a video of a black bear with 3 young cubs that I shot at the Canon City, Co Riverwalk yesterday (this is the second clip, I am having problems editing clip I so it will go up later). The black bear momma stops for some food--and it's bear food not human food-yeah (sadly many who live near this natural area leave out garbage or worse yet bird feeders plus management of Riverwalk refuse to purchase bear-resistant trash containers--shame on them all). She is shown doing some digging, maybe for some roots or grubs. The cub next to her looks like it is tasting the tall grasses in this forested area of the Canon City,CO Riverwalk. When momma decides it's time to leave, the cubs begin to follow and one looks in the light to be a cinnamon colored cub. The end of this clip is pretty cute as each cub follows, and the last one runs to catch up. BTW-the bears are about 150 feet away (which was closer than I had intended) but close shots from 40X zoom. SeEtta
Post a Comment
Read more

- July 03, 2011
I took this video clip tonight of what looked to be an adult Western Screech Owl. It is perched about 30 feet overhead which makes it stand out clearly. Again, the soft intra-familiar call can be heard. It was very windy and I would have enjoyed watching the family tonight as this kept the terrible mosquito infestation down but I only saw this owl and none of the others. SeEtta
Post a Comment
Read more
More posts