Showing posts from September 9, 2012
Show all 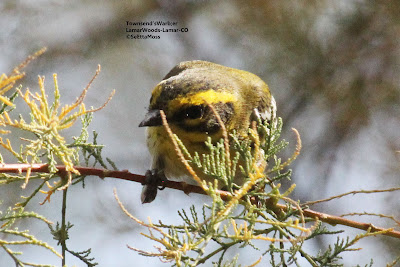 Though it seems to be heresy to publish a bird photo that has foliage in front of it's face, I think these show the reality of what one sees in the field. And in the photo above, it provides an interesting view of the bird. I rarely catch a bird in mid flight like the one in the bottom pic. SeEtta 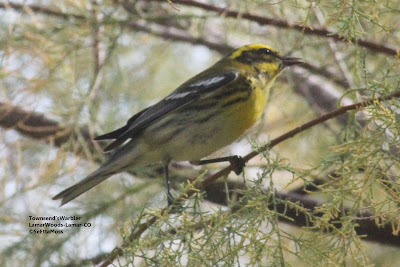 Today I saw my first Townsend's Warbler along the Riverwalk in Canon City where I live. I didn't get any photos of it but I took these earlier this week of several of the 7 or so Townsend's I saw in Lamar Woods in Lamar, CO. Townsend's are outstanding in the fall in their bright plumage while many other warblers are so drab. SeEtta

- September 15, 2012
I spotted this Common Nighthawk sleeping on an electric line yesterday. Though the line is fairly thick, it is amazing that these birds can balance themselves while asleep.
I think this is a juvenile bird as it has very pale plumage and lacks the white/buff patch on it's neck SeEtta
Post a Comment
Read more 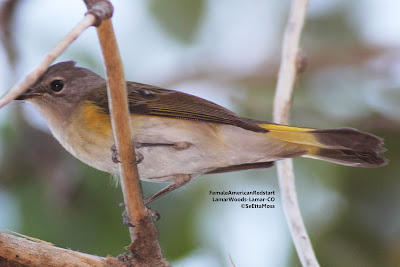 Before I left Lamar I stopped by the Lamar Woods where I found this pretty female American Redstart on Monday morning feeding in and around a grove of tamarisks but I was unable to photograph her. That evening around 6:30 pm I found the bird in these photos, a female American Redstart that was right in the same tamarisk grove where I had seen the bird in morning so likely the same one. She, and other warblers, were very actively feeding but she was higher up so I got these pics. The next morning I spotted a female American Redstart foraging within 20 feet of where I had seen this bird before so again likely the same one that had stopped over to fatten up for the next leg of her trip south. SeEtta

- September 13, 2012
I got to do some birding in the migration hotspot called Lamar Woods in Lamar, CO this past week in between setting up for our Audubon Colorado board meeting in Lamar (a first) and an Audubon work project to help the Lesser Prairie-Chickens south of there. This is a fall Magnolia Warbler which is somewhat rare in Colorado. Identifying field marks are gray head with bold white eye ring, streaking (though muted in fall) on flanks, two white wing bars, yellow throat and underparts, white undertail coverts (glimpsed in lower pic)and greenish back.

This is an immature bird as indicated by the lack of black streaking on chest as noted in AllAboutBirds webpage (seen in field, not visible in photos). SeEtta
Post a Comment
Read more
More posts