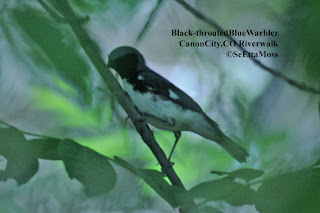 Having missed the Black-throated Blue Warbler in So Texas, I was pleased to see one today back home in Canon City, CO. I was birding on the Canon City Riverwalk late this morning when I came across a local birder, Rich, who told me had just found a Black-throated Blue Warbler and had heard a Hooded Warber singing. I told him I was hearing a song I was unfamiliar with and we decided it was a Black-throated Blue then Rich refound the male in these pics (though it foraged where we could see it for several minutes, it was about 50 feet back in the dark foliage so the pics came out dark) and a male Hooded Warbler. Nearby a Gray Catbird was giving it's whiny call. While birding in different areas, Rich also found a female Hooded Warbler, a species that has nested in Canon City. We ran into each other again where the male Western Tanager in the bottom pic (demonstrating how a little light can really improve a pic) and a quiet Wood-pewee (likely Western) were foraging. SeEtta
Post a Comment
Read more
- May 15, 2009 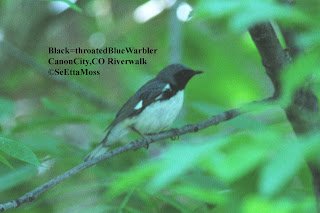 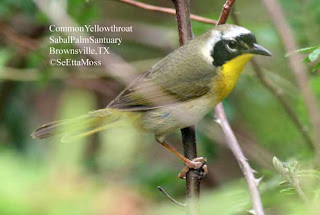 According to Birds of North America online, one of the subspecies of Common Yellowthroat, referred to as the "Brownsville Yellowthroat" (G. t. insperata) is currently known to breed only in Cameron County, Tx which the county in which Sabal Palm Audubon Sanctuary is located and where this subspecies is found. I learned this because I saw a Common Yellowthroat that sang a song very different from the "witch-i-ty" song that is associated with this species. In fact, it sang a very melodic and complex song. This is a pic of that bird that is probably a "Brownsville Yellowthroat".

It is important that we do not lose subspecies of birds. Since this subspecies is only found in this one county of the U.S., it is vital that proper habitat for this subspecies be conserved--another reason to Save Sabal Palm. SeEtta
Post a Comment
Read more

These are two of the migrating warblers (Chestnut-sided Warbler above and Blackburnian Warbler below) that I saw at the Sabal Palm Audubon Sanctuary about 2 weeks ago (and larger photos posted on below on my blog on April 27). They were foraging actively with other migrating warblers including 2 Black-throated Green and several Black-and-White Warblers. The Sabal Palm Audubon Sanctuary provides important stopover habitat for many migrating birds. This is another reason that we must Save Sabal Palm from being isolated behind the Border Wall, which is a taxpayer rip-off as well as a disaster for conservation in the Rio Grande Valley. SeEtta
Post a Comment
Read more 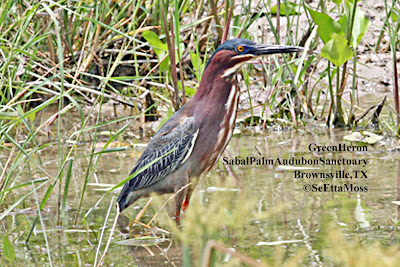 The Sabal Palm Audubon Sanctuary also has a blind that reaches out over a pond and wetland area that allows closer views of a number of waterbirds and waterfowl that might be shy. I watched this Green Heron as it actively foraged, stalking frogs/fish/snakes unseen by me.
The Green Heron in the lower pic was in the process of thrusting it's bill to grab some prey, making the pic a little blurry--but the heron was successful. SeEtta
Post a Comment
Read more 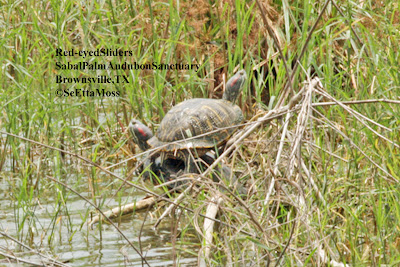 The Sabal Palm Audubon Sanctuary provides habitat for not only birds but other critters including these red-eared sliders, a common turtle found in eastern U.S. I also saw one of the jackrabbits that reside at the Sanctuary. Their website notes they also are home to the Texas Tortoise,leopard frogs and to a large number of butterfly species. Bobcats are not unusual at the Sanctuary though they are mistaken for ocelots, a rare species that like the also rare jaguarundi may use the Sanctuary. SeEtta
Help us Save Sabal Palm: call or send an email to the White House and ask them to not wall-off the Sabal Palm Audubon Sanctuary behind the Border Wall--
White House:
Comments: 202-456-1111 (9-5 EST)
Switchboard: 202-456-1414
FAX: 202-456-2461 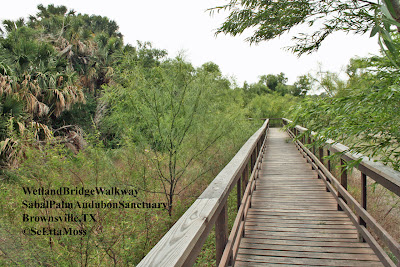 What makes Sabal Palm Audubon Sanctuary so valuable is the habitat including the sabal palm forest that was extensive along the Rio Grande Valley until man cut them down for agriculture and other development. The Sanctuary has several miles of interconnected trails, including boardwalks like the one pictured here. Many of these trails are fairly level so accessible to those with ambulation problems plus they have a wheelchair accessible deck.
According to the Sabal Palm Audubon Sanctuary website, "The Center is home to many native species of plants and animals that reach the northernmost limit of their Mexican range here and do not occur elsewhere in the U.S. Cradled in a bend of the Rio Grande along the U.S./Mexico border, the Sabal Palm Audubon Center harbors one of the most beautiful and critical ecosystems of South Texas and Northern Mexico. Sabal Palms once grew profusely along the edge of the Rio Grande in small stands or groves extending about 80 miles upstream from the G…
Post a Comment
Read more

- May 10, 2009
Sabal Palm Audubon Sanctuary is at very high risk as the Border Wall is moving close. Following is excerpted from the Lower Rio Grande Sierra Club:

"The Sabal Palms Audubon Sanctuary preserves 557 acres of sabal palm forest. The border wall will be built just north of the levee that marks Audubon's
northern boundary. Homeland Security has only been willing to pay for the exact footprint of the wall, not the damage and devaluation that it will bring to adjacent properties. Because the wall will be built a few feet to
the north of their property line, the Department of Homeland Security has not
offered Audubon any compensation whatsoever. Audubon has said that restricted access for their employees may force them to cut their operations. There is
also the concern that uncertain access for emergency personnel may
make it impossible to purchase the insurance that allows busloads of local
school children to visit the center. The combined impacts of the border wall a…
Post a Comment
Read more
More posts