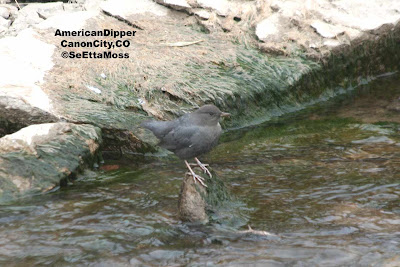 American Dippers spend their lives in and around water. They feed almost entirely on aquatic insects and "occasionally other invertebrates, small fish, fish eggs, and flying insects" according to "Birds Of North America" online.This dipper has been in and near the Arkansas River on my friend' place just east of Canon City, a location where 1-2 dippers have wintered the past several years. Last week this dipper flew towards me as it chased another dipper, likely in a territorial dispute. As it chased the other dipper, it sang some of a melodic tune then launched into it's rattle-call (similar though higher pitched than the rattle of Belted Kingfishers) Double-click on the pic for a closer view. SeEtta
Post a Comment
Read more

- November 24, 2008
Yesterday morning I got out in the cold (lower 20's) to do some birding before sunrise. I caught this adult female Cooper's Hawk in the warm glow of the dawn sunlight.
I included the bottom pic because it shows the head profile--squarish appearance of head that is distinctive from rounded smallish head on Sharp-shinned Hawks. Other field marks not apparent in pics but were visible in the field. Double-click on pics to enlarge them. SeEtta
Post a Comment
Read more 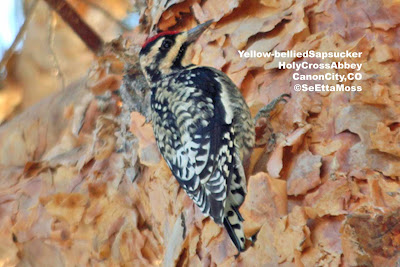 Yellow-bellied Sapsuckers, a woodpecker usually found in the eastern United States, have been wintering in Canon City every year since November, 2003. They have also wintered in Pueblo for a number of years beginning before this. Subsequently they have been found wintering at the Lakeside Cemetery and Centennial Park most years, and in a few other locations in the Canon City area occasionally. Most members of this species migrate south to the southeastern quarter of the United States, southward to Panama and the West Indies in the winter with females generally migrating further south.