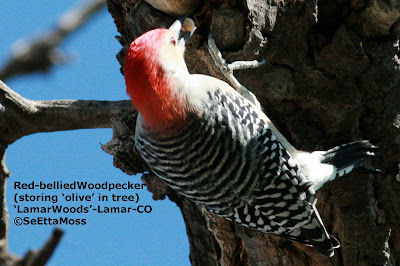 This is the same male Red-bellied Woodpecker posted below that was picking 'olive' fruit from the Russian Olive tree. Here he is storing that fruit in a natural crevice under the small tree limb where the collar of the limb is separated from it.
In the bottom pic you can see that the woodpecker is pushing the fruit far into the crevice. This is consistent with report in Birds of North America online that Red-bellied Woodpeckers store their food deep into crevices to keep them from being taken by other birds and animals. SeEtta
Post a Comment
Read more

Northern Cardinal series-lookin for a foe 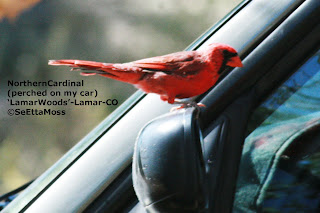 I had parked my car only about 20 feet from the edge of the 'Lamar Woods' and clearly close enough for this territorial male to perch on it in order to look for that foe he has to fight off (actually his reflection in the side mirror or car windows).

I was told by local birder Jill White Smith that he has a habit of checking out car windows and mirrors for the interloper that he sees.

In the second photo his image is clearly visible in my door window. In the last pic he has apparently decided that the foe isn't worth the trouble as he didn't attack it, just hopped on the mirror and left. SeEtta
Post a Comment
Read more 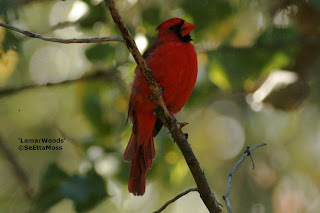 This is another Lamar specialty species that is resident in this far eastern city in Colorado. Actually there are apparently two families of Northern Cardinals that frequent the 'Lamar Woods' area as local birder Jill White Smith keeps track of them.

I most often saw this male either distant as in the middle pic or through dense vegetation where he skulked just barely in sight.
He sang frequently and there was often another Northern Cardinal in the area in which I saw him, sometimes an adult female and sometimes an immature bird that was presumably his offspring. SeEtta 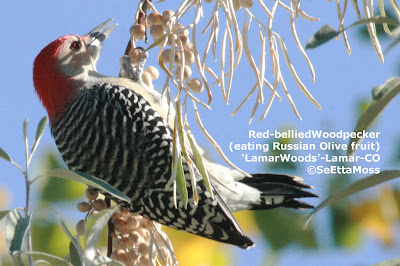 In addition to all the rare vagrants I have posted about that I found in 'Lamar Woods' last week-end I also saw local specialty birds like this Red-bellied Woodpecker, a species that is resident in this location and others on the eastern Colorado plains near the Kansas border (and thus closer to their range). This male was very busy eating and gathering the 'olive' fruit of Russian Olive trees as he is doing in these pics. The bottom pic is an enlargement of the top pic that really shows his beautiful brown eyes and his not so beautiful but different grey feet (I wonder how many specie have grey instead of black feet?). More pics to follow. SeEtta 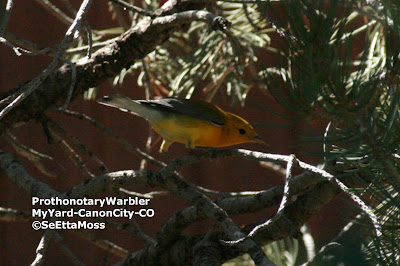 I am really pleased with how nicely the top pic came out as the bird was in a shaded shrub a good 35 feet away. The shade does make the yellow look darker (again, these pics have only been cropped, no other editing). Since my binoculars were not handy I spotted, followed and even identified this bird with my bare eyes. I think this is proof that the surgeries I have had on and near my eyes this past year have provided me with pretty darn good vision for this point in my life cycle. SeEtta

Prothonotary Warbler in my yard in Canon City, CO! 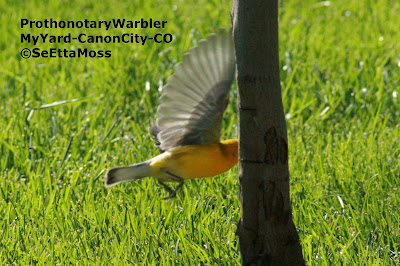 Today I had chores to do as I returned home from my trip to the Lamar, CO area last night so I didn't go anywhere to do any birding for a change. But I heard a chickadee in my yard calling so I called back several 'sip/seep' type calls. I was stunned to see a very bright yellow warbler-looking bird fly across my covered porch while it make 'tsip/tseep' calls. It's calls were unusually loud and as it flew I saw white undertail feathering, the bright yellow with no wing bars--my immediate impression was a Prothonotary Warbler (I think I saw this species in So Texas years ago when I was first birding but I am familiar with what they look like from field guides) so I put a lot of effort into continuing to call and watching the bird as it flew around my yard (naturally my binoculars were in my car in the front of my house). I got my dslr camera (which as usual had my 400mm lens and 1.4X extender) from my huse and snapped several photos of it. It continued to …
Post a Comment
Read more 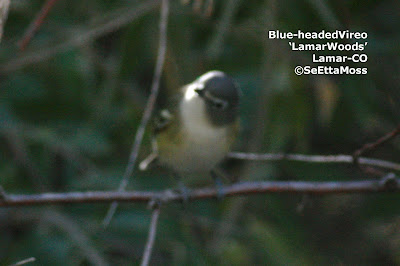 I think the top pic here shows most clearly the very distinct contrast between the very white neck and the dark bluish gray head on this bird, which I have read is a very important field mark in differentiating Blue-headed from the less contrasted Cassin's Vireo. Birds of North America online also notes that the crown on Cassin's Vireo is "brownish gray, with little contrast to brownish olive gray back;" This vireo does not show any brown in it's plumage and the bottom pic shows what I think is a clear contrast between the dark bluish gray crown and the greenish back on this bird. SeEtta

Blue-headed Vireo it is 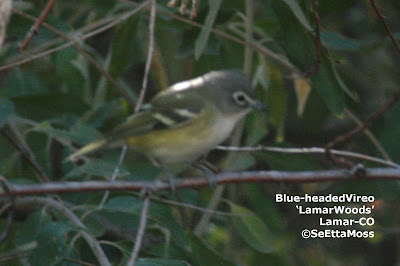 The solitary-type vireo that I found at 'Lamar Wood's in Lamar, CO yesterday appears to be a Blue-headed Vireo, a rare vagrant in Colorado. Since this is the first time I had seen this species, I wasn't very sure that it was a Blue-headed and not a Cassin's Vireo which is similar. Since posting 'raw' photos (cropped only with no tweaks) I have received emails from several highly skilled birders who said they believed this to be a Blue-headed. More photos, tweaked a little, in next post. SeEtta
Post a Comment
Read more 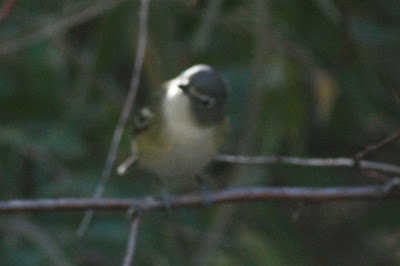 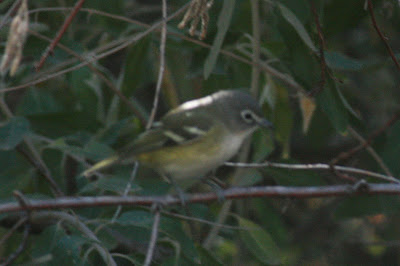 I found this vireo which is clearly in the plumbeous vireo complex but it is difficult to separate Cassin's from Blue-headed (certainly difficult for me). This bird does show the clear demarcation between the gray plumage and the throat and the throat is very white. This bird's crown appears to me quite dark gray while Cassin's, at least in Definitive plumage, are said to be brownish gray. This bird also seems to show good contrast between back and crown, which is suggestive of Blue-headed. SeEtta
Post a Comment
Read more
More posts