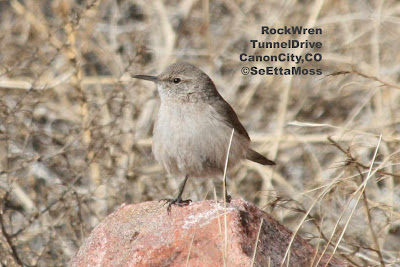 Though I don't know of any relationship to the previous post about birds wintering further north related to Climate Disruption (better term than Global Warming or Climate Change), Canon City has had wintering Rock Wrens at Tunnel Drive for some years. This is noted in "Colorado Birds" that was published in 1992. And it has been my experience at least for the past 10 years. This pic is one I took of a Rock Wren I found at Tunnel Drive. Double-click on it for a nice close-up.

Tunnel Drive is an area right at the mouth of the Royal Gorge canyon just on the west side of Canon City. The Arkansas River flows just south of the location while the foothills begin here. This area also is the site for Rufous-crowned Sparrows that are resident here. This species is usually found in the southwest United States and only found in 3 other Colorado locations, all in southeast Colorado over a hundred miles from here. SeEtta
Post a Comment
Read more

National Audubon Society released a report recently that showed that many birds in North America are wintering much further north than they used to. They used Christmas Bird Count data to look at where birds have been found over the a 40 year period. This graph from Associated Press shows some of the species that have been found wintering further north and the distance north. ©AssociatedPress