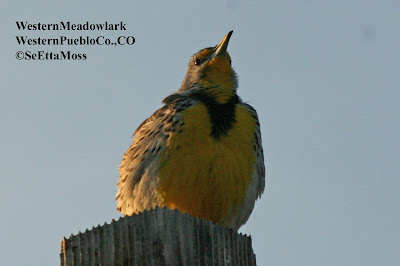 These are good pics of the Western Meadowlark that I videotaped and posted clips for below. You can double click on each for very close-up views. SeEtta

- March 15, 2011
This video clip of a Western Meadowlark I recorded recently in western Pueblo County really highlights the unusual vocalization , identified as the flight song (though being given from a perch), after the primary song by this Western Meadowlark--it will sing it's primary song several times then give a lengthy series of unusual vocalizatons that is it's flight song. Though the video portion isn't great due to backlighting, if you view it full screen you can see the birds bill, throat and tail move as it emits the unusual vocalizations(some sound very flute-like). SeEtta
Post a Comment
Read more
More posts