- April 25, 2013
I refound the Broad-winged hawk I discovered in Canon City earlier this week. Glad to get some photos showing underparts as it flies. SeEtta

- April 24, 2013
Though difficult to photograph through all the branches plus a chain link fence, this Green Heron seemed to think it was invisible when I spotted it this morning. You have to admire these skulking birds that peak out from behind small branches they seem to believe cover them completely. SeEtta
Post a Comment
Read more

Over a hundred White-throated Swifts migrating over Canon City area

- April 24, 2013
Please don't complain about the photo--this flock of White-throated Swifts that contained this one bird was circling over a hundred feet over the Arkansas River (likely place for insects to capture) and they do not fly slow. I was amazed to find well over a hundred of these birds that stopped briefly to feed as they are migrating through. I tried to look at every swift I could to see if there were other swift species but only saw White-throated. SeEtta
Post a Comment
Read more

- April 24, 2013
I found this migrating Blue-gray Gnatcatcher flitting about the shrubs on the Canon City, CO Riverwalk this morning. This species breeds in the foothills shrublands that begin just west of Canon City. SeEtta

- April 24, 2013
In the top pic the Western Screech Owl is so ready to be released it looks like a runner in the starters position, ready to fly off. And that is what it did. Diana Miller was going to kinda put it up to the nearby evergreen tree but it flew quickly from her hands, around that tree to one just on the other side of the driveway--it knew where it wanted to go.

The bottom pic shows the little owl where it basically buried itself in this arborvitae tree-it's wings a little off to the side but it's body standing on a branch a little inside with the protection of it's dense branches. Though it readjusted position a few times (especially when local Am Robins pair saw it in their territory and threw a fit) but remained there about 10-12 feet above the ground in this tree until dark. It is likely it has now left, maybe done some hunting, and refound it's roost tree. This was a fun event. SeEtta
Post a Comment
Read more

W. Screech Owl released back to the 'hood'

- April 24, 2013
This is Diana Miller who is the Director of the Pueblo Raptor Center holding a Western Screech Owl. It was not acting right plus being mobbed by Blue Jays and a neighbor, Nancy Jordan, fortunately was observing it in her yard and contacted local Wildlife Office Zach Holder. Long story short--I ran into Zach and he told me he was trying to make arrangements for someone to meet him halfway to transport an injured owl to the Pueblo Raptor Center so I volunteered to do the transport.
The owl turned out to have a concussion and has been in the Raptor Center for past 3 weeks but was ready to be released. Per protocol raptors are released at or near where they are found. So Diana brought the little guy (yup, a male) back to my 'hood' in the Lincoln Park area of Canon City, CO late this afternoon and is preparing to release him into one of the nearby evergreen trees. The rest of the story above. SeEtta
Post a Comment
Read more

Long-billed Curlews: another flight plus a landing pic

- April 23, 2013
I do enjoy watching and photographing these curlews in flight (this photo enlarges nicely so click on it for close up views of each bird). And they are neat when they land as shown in pic below--they have their wings outstretched, showing off the underwing and their sides not usually seen. SeEtta

- April 23, 2013
I took these photos yesterday when it was sunny and not snowing as the Long-billed Curlew took flight several times. These flight shots show their neat plumage. SeEtta

- April 23, 2013
Though it was 70 degrees F here in Canon City yesterday, the overnight low dropped to 22 with this snowstorm and this Long-billed Curlew sure looks like it trying to keep warm. SeEtta

Both male and female Long-billed Curlews

- April 23, 2013
Though all Long-billed Curlews have very long bills the bills are females are exceptionally long. The above pic is of a male and pic below is of a female. SeEtta

- April 23, 2013
I was so surprised and delighted yesterday when I spotted these Long-billed Curlews feeding in a hay field that was being flooded. I have never seen them in Fremont County or even closer than 100 miles east of here. I found a flock of 14 then found 3 more in nearby flooded field for a total of 17 of these birds that are a species of concern. More pics to come. SeEtta

- April 22, 2013
Also in the fairly unusual species to visit the Canon City area are immature Harris's Sparrows that usually visit in the winter. I found this one in a friend's yard and it was not cooperative about being viewed or photographed so stayed in the middle tree branches (can't blame it as unfortunately there are a number of outdoor cats there and my complaints have fallen on deaf ears about the carnage of native birds by these domestic cats). The pink conical bill that is found on this species is clearly seen as is part of it's limited black bib and black flecking on it's face and crown. The buffy base color of it's face shows but is washed out some by the backlighting. It also shows the white belly and brownish flank streaking found on immatures.

I had an immature Harris's Sparrow about a quarter mile away this winter so this is possibly the same bird. However it was located at a house with bird feeders then and this location has no feeders. SeEtta
Post a Comment
Read more

- April 22, 2013
Broad-winged Hawks are rare visitors to the Canon City area with usually only one or two birds found each year. I spotted this one as I was driving and was able to get these good photos before it flew off. It is one of the more heavily marked birds and I find it's dense barring. And that 'pale orangish brown iris' (well described by Brian Wheeler) is unusual for adult hawks which usually have darker irises. SeEtta

- April 21, 2013
I was delighted this morning to find that the Black-crowned Night-Heron was at Sell's Lake. It was active and did some feeding providing the view below (it caught some small food item but I can't tell what it is). Then it flew off down the Arkansas River giving me the opportunity for the good flight shot above. I checked back this evening and didn't see it so not sure if it will return. SeEtta 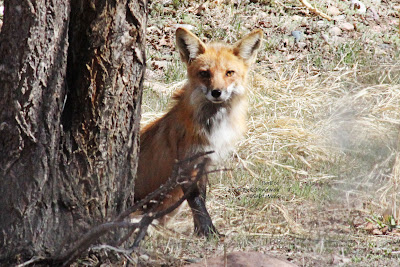 Since foxes have adapted so well to human habitats it is not unusual to see them in urban areas including the Canon City Riverwalk. There was something about this red fox's face that seemed unusually pretty. SeEtta