One last shot of a White-throated Swift in flight 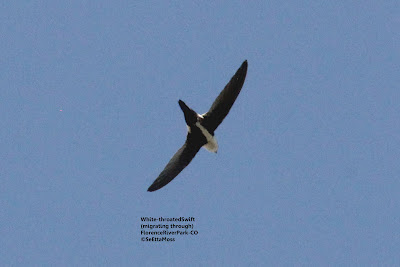 I thought this photo really showed off some of it's field marks of this species: white throat and belly and white sides on rump. The tips of the secondaries show up as lighter in color though not white. SeEtta
Post a Comment
Read more 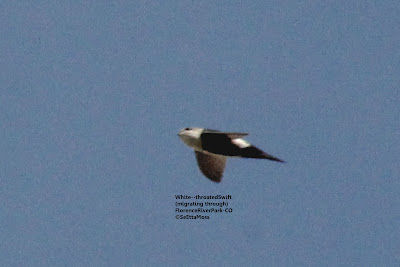 Before I left Florence River Park yesterday a flock of 30 or so White-throated Swifts that were migrating made a stop-over to feed above this location (it is not near any cliffs but I have seen this species overhead during migration here before). These birds were flying at 100+ feet high as they flew in around and around overhead. These swifts always challenge my ability to not only track them quickly as they fly over but hold my heavy camera and long lens steady--plus with my lens and extender combination I have to manually focus. So I was happy how well these pics came out. SeEtta

First of the fall Ruby-crowned Kinglet 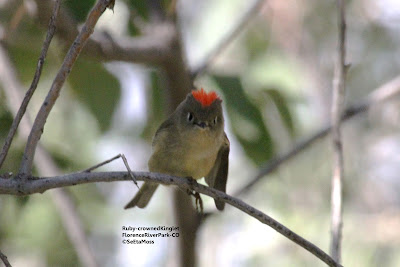 Boy did this little Ruby-crowned Kinglet live up to it's name! It had it's bright ruby red crest raised most of the time I watched it foraging. You would think from looking at the top pic that it was agitated but it wasn't engaged in battle with any other birds and didn't seem agitated (I have always heard them vocalize as part of agitation and this one didn't)--but it was a cool view.   Amazing the number of interesting birds in Florence River Park this week--much different than it has been for a long time. SeEtta 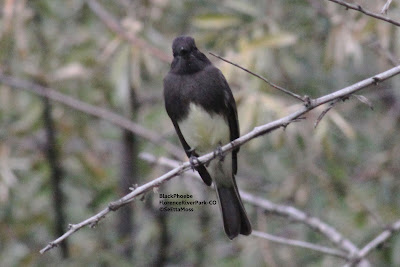 I posted a few days ago that there were 2 Eastern and a Black Phoebe in Florence River Park and I posted photos of one of the Eastern Phoebes below. Yesterday I was able to get this photo of the Black Phoebe. SeEtta
Post a Comment
Read more 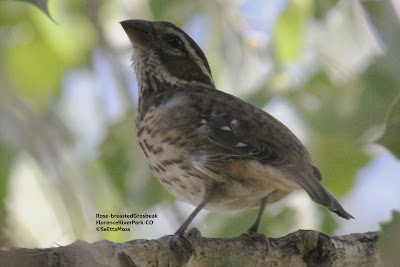 I spotted this Rose-breasted Grosbeak in Florence River Park yesterday but had a hard time getting a photo as it was 'camera shy'. Finally got it in the middle of some foliage so it was pretty dark, making the bill look darker than it was--just click on the pic to enlarge it and the lightness of the bill's coloration should become clear. SeEtta
Post a Comment
Read more

Red-naped Sapsucker at the Abbey

- September 26, 2012
I spotted a Red-naped Sapsucker 4 days ago at the Abbey when it chased off a Williamson's that was feeding on one of their pine trees. I didn't get to see it well enough to tell it's gender but I photographed this Red-naped there today and it is a male. It was feeding on one of the diverse species of deciduous trees on the Abbey's grounds. Not sure if it is just stopping over to feed during migration or if it is an early 'wintering sapsucker' that stay in Canon City usually from Oct to late winter. SeEtta Here is a Townsend's Warbler appearing to glean an insect larvae from a cottonwood tree leaf. It looks like this infestation of insect larvae (or maybe pupae?) have provided a veritable feast for at least those warbler species for which gleaning this larvae is compatible with their food habits. (most of the Wilson's and Orange-crowned Warblers in this park were mostly foraging low to the ground in shrubs) A check of Birds of North America online shows Townsend's Warbler is known for gleaning insects. It also states that the Yellow-rumped Warblers that were in abundance "Primarily gleans insects from leaves and branches." Researching this I found that leafminers are insects that feed inside of leaves and that they produce large 'blotches' that are irregularly round. I found one leafminer, thePhyllonorycter apparella, that "feeds in an underside mine on cottonwood" and other willow family trees causing a yellowish blotch (called a 'mine…
Post a Comment
Read more 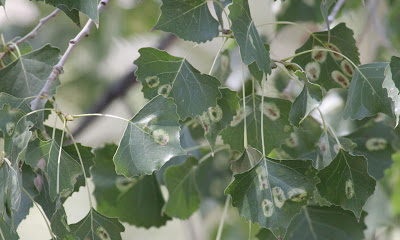 On Saturday I was delighted to find dozens of warblers at Florence, CO River Park. Though they were mostly Yellow-rumped Warblers with a few Orange-crowned and Wilson's and one Townsend's, this was still a big event for this location (which has been degraded a bunch in past several years).

As I watched and took photos I noticed that the leaves on the cottonwood tree leaves, where much of the frenetic feeding action was taking place, had several spots on each leaf. And most of the leaves on most of the cottonwood trees had these yellowish spots on their leaves. When I examined the leaves close up it appeared that there were insect larvae inside the leaves.
In the bottom photo a few of the leaves look like the insect larvae might be maturing, causing parts of the spots to be blackened. Also the spots were more raised than the ones that were mostly yellow. More above. SeEtta
Post a Comment
Read more
More posts