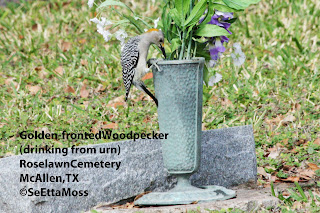 I spotted this Golden-fronted Woodpecker and Northern Cardinal in the Roselawn Cemetery getting a drink from one of the urns that are filled with fresh flowers. This source of drinking water, the first I have observed, adds to the better known amenities such as diversity of trees and minimal disturbance that cemeteries offer to birds. SeEtta 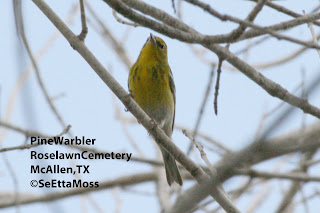 While birding in the Roselawn Cemetery I found this Pine Warbler, I believe a male, foraging in the same area as the Greater Pewee. SeEtta

Greater Pewee--check out that schnoz 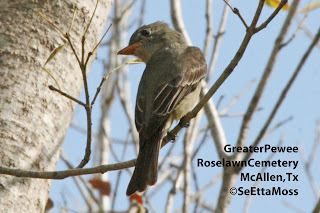 Just one more pic that helps show off the yellow-orange mandible on it's bi-colored and very large bill on the Greater Pewee. (It's crest, white chin and dark upper bill visible on pics in prior post while plain gray plumage shown on pics in both posts). When I viewed this bird it showed a greenish tinge to some of it's lower parts which hadn't been reported or noted by other 2 birders who viewed it with me. I did find that Birds of North America online states that for birds in Definitive Basic plumage, "Fresh plumage more deeply colored than spring plumage aspect described below, with upperparts more olive, lower parts more strongly suffused with yellowish buff or greenish yellow." Since this plumage is acquired after pre-Basic molt that occurs in July through September, it's plumage shouldn't be too worn yet. SeEtta
Post a Comment
Read more 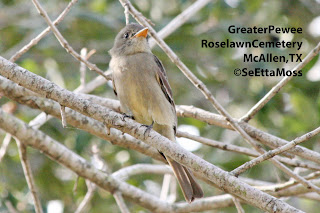 I photographed this Greater Pewee in Roselawn Cemetery in McAllen,Tx. It was located by a gentleman from Idaho. These photos can be enlarged for close-up views by double clicking on them. I thought the bird had a greenish wash on it's underparts but that didn't come through in the photos--has anyone else seen that? SeEtta
This cemetery was exceptionally birdy including a female Summer Tanager that only allowed quick looks and no pics.