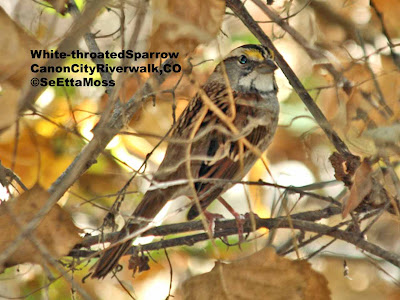 Today I found this White-throated Sparrow on the Canon City Riverwalk around noon. Though similar to related White-crowned Sparrows (both Zonotricia genus), White-throated Sparrows have distinctive yellow lores, clearly outlined throat and rufous coloration to their wings. Also, though White-crowned Sparrows are often found in flocks, White-throated are found singly in Colorado where they are quite uncommon and generally seen during migration. This sparrow stayed inside the vegetation during the several minutes I observed it so this was the best pic I could get. Double-click on the pic for a close-up.

I also saw 2 warblers high in the cottonwoods near where I found the White-crowned and heard them give a few chip calls. I think they were likely Orange-crowned Warblers. They were moving quickly in a mixed group with Black-capped Chickadees, a White-breasted Nuthatch and 1-2 Hairy Woodpeckers--all foraging about 70 feet above the trail. SeEtta
Post a Comment
Read more

Colo-vote for birds+ :YES on AMENDMENT 58 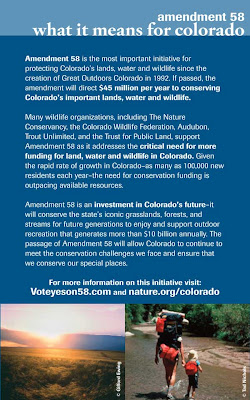 Colorado voters can help birds, butterflies, fish and other wildlife by VOTING FOR AMENDMENT 58. SeEtta
Post a Comment
Read more

- October 19, 2008
This is one of a pair of White-breasted Nuthatches foraging near each other in the same tree on the Canon City Riverwalk. According to Birds of North America online, this species is socially monogamous, maintains their pair bonds year round, and "pairs remain together from the time they establish a territory until one of the partners disappears." These birds emitted soft calls, mostly the "hit and tuck" call that sounds like "ink." SeEtta
Post a Comment
Read more 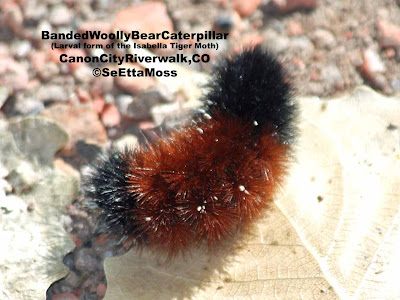 I saw this attractive caterpillar on the Canon City Riverwalk this morning, it's full name is Banded Woolly Bear. I have read that they are often seen in the fall after they emerge from the egg to overwinter in the caterpillar larva form. When winter is over, they pupate and emerge as Isabella tiger moths. Folk tales had it that the amount of black on these caterpillars predicted the severity of the coming winter--not true as this is related to it's age. The bottom pic shows the interesting pattern of their bristly hairs. The small tan spots are grains of sand from the trail as it rolled up in a defensive move when I moved it into the clearing for a better pic. SeEtta
Post a Comment
Read more
More posts