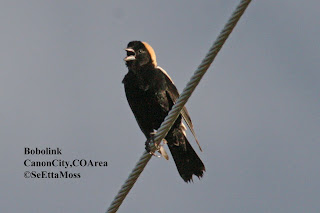 I found this guy yesterday, the first Bobolink I have found so far in the Canon City,CO area. We are at the extreme limits of breeding for this species but I have been finding them almost every summer for about 15 years since they were first seen in this area. SeEtta 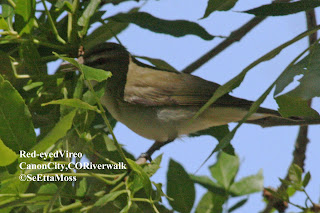 Red-eyed Vireo are like the ever-ready bunny of singers--they just keep singing and singing and singing with only brief breaks. This bird was foraging around the Sell's Lake parking lot of the Canon City Riverwalk when I went down to do some birding this morning. Though it spent most of it's time high in the canopy of large deciduous trees as is it's habit, I caught it in a smaller tree where I got these pics.
I really liked the rear-view shot in the bottom pic. It shows the quite pale shade of yellow on it's undertail coverts. SeEtta 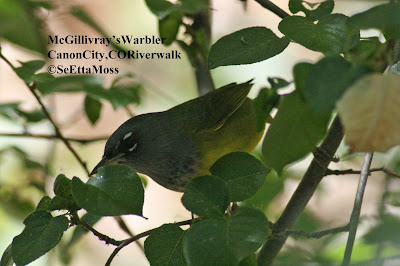 Back home now in Canon City,CO so birded the Canon City Riverwalk this morning. I found this McGillivray's Warbler that had lost it's tail making it an unusual short warbler. SeEtta
Post a Comment
Read more 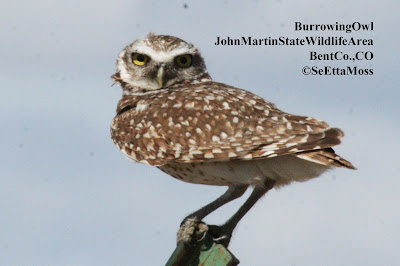 This Burrowing Owl was perched on a fence post at the John Martin State Wildlife Area east of Las Animas, CO. Their extra big eyes (relative to the rest of their faces) is likely what is so appealing about them (like with other critters with large eyes). SeEtta
Post a Comment
Read more 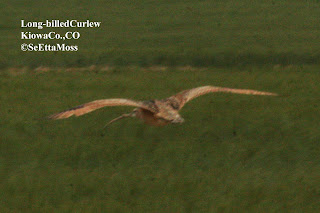 I was surprised to find this Long-billed Curlew foraging in dryland wheat field in Kiowa County, CO and I saw it with at least one good size prey in it's bill (big enough I could see it thru my spotting scope with the bird about about a hundred feet away). It surprises that they would forage, and forage successfully at that, in this monocrop agriculture. Please note the difference in these pics related to my changing my camera settings due to change in overcast conditions. SeEtta 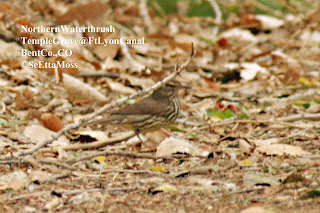 Winds were terrible, strong and very gusty but there were still migrating warblers at Temple Grove @ Ft Lyon Canal north of Lamar. Fortunately this great grove of trees and shrubs, less than 200 feet wide at most, provided shelter from the winds so that warblers and other birds could forage, albeit closer to or on the ground. The Northern Waterthrush in the top pic was walking on the canal road foraging for bugs blown out of the canopy as the water level in the canal itself was so high the bank sides were too steep.
Since McGillivray's Wablers spend a lot of time close to the ground, the bird in the bottom pic was less impacted by the winds. I also refound the Hooded Warbler that I posted about 2 days ago, and he sang off and on but much less than the other day. Also he spent his time on and near the ground where foraging was less risky than in the blowing branches of trees. It was overcast and dark so pic quality suffered. SeEtta
Post a Comment
Read more 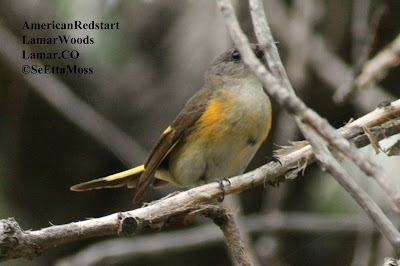 I ran into local birder Jill White Smith who had found an American Redstart in Lamar Woods earlier this morning. I was able to refind it as well as a second American Redstart foraging nearby. These two were very active, flitting about constantly and quickly higher in the canopy. I think these are adult females because they have the 'yellow base of remiges' noted in The Sibley Guide to Birds. SeEtta 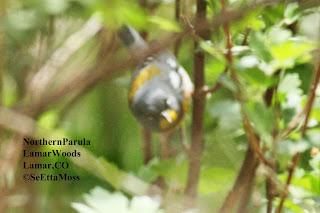 I know, not a very good pic but this warbler was not being cooperative. Though it sang for a little while, it spent most the time foraging in thick weeds where I only got brief glimpses. However, this pic does show much of the field marks for a male of this species-- bluish upperparts with a green mantle, yellow throat with a dark colored breastband (actually black and rufous but colors not clear in this pic), white wing bars and even showing some of the white on the belly. SeEtta
Post a Comment
Read more 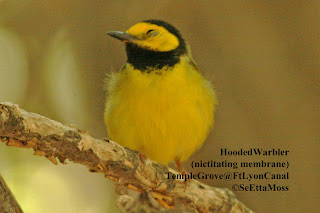 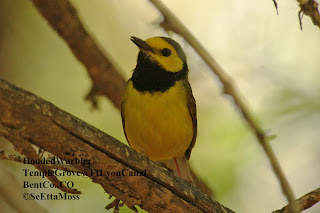 This great little warbler would forage for awhile then stop to loaf, sometimes groom a little then sing. A couple of times he would fly in quite close to me as I stood as motionless as possible. SeEtta 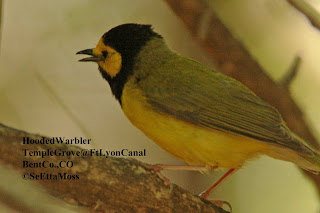 I ran into some Boulder birders this morning who told me there was a singing Hooded Warbler and a singing Red-eyed Vireo at Temple Grove earlier today. I had not intended to bird Temple Grove today but this changed my plans (plus I had lost the Philadelphia Vireo I had been following at Lamar Woods in hopes of getting a pic of it). Due to a need to get my car tire repaired before venturing out of town I did not get to Temple Grove until noon. Within a few minutes I heard this Hooded Warbler singing and a little later was able to get these sweet pics of him. What a beaut. More pics coming. SeEtta 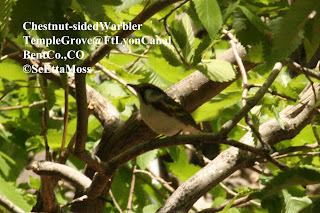 This is the third warbler that is rare to Colorado that I found on Saturday at Temple Grove on the Ft Lyon Canal north of Lamar, CO. Though I refound him again Sunday these were the best pics I could get as he stayed most of the time about 40 feet away on the other side of this wide canal. This little guy foraged mostly in the deciduous trees.
I birded Temple Grove again today but there was no sign of this little guy so he too must have moved on to his breeding grounds. SeEtta

Three more pics of this very good-looking Magnolia Warbler (even it's name sounds gorgeous) that I photographed over the week-end. I saw him both Saturday and Sunday with pics days but did not refind him when I visited Temple Grove today so I guess he fueled-up to continue his trip. SeEtta

Photo of Magnolia Warbler I found at a hotspot north of Lamar,CO 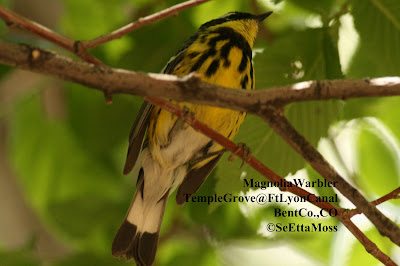 After I found this lovely male Magnolia Warbler yesterday at Temple Grove, along the Ft Lyon Canal, I spent about 45 minutes trying to get a reasonable pic of the bird. He was about 45 feet away on the other side of this wide canal, under the wonderful deciduous tree canopy that makes this a special place, and flitting around between the branches of some conifers planted there as he foraged very actively--so getting a reasonable pic was quite challenging. Then he apparently decided that the bugs on my side of the canal were better so he flew into a small tree directly above me! Fortunately I was able to get this one very good shot as--ironically--he was too close most of the time for my super zoom camera lens to focus. This pic came out so good I did not have to crop or do any editing-just added the text. SeEtta
Post a Comment
Read more
More posts