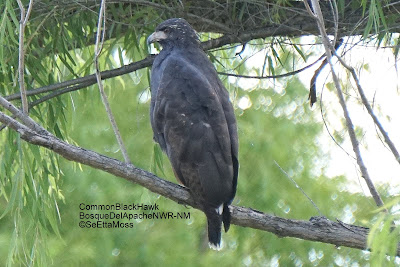 I spotted this Common Black Hawk perched in the branches of a tree as I drove around the road on the east side of Bosque del Apache National Wildlife Refuge this afternoon.  It is amazing how that black plumage blends in with the habitat.
Common Black Hawk is a pretty rare species whose range in the U.S. is limited to restricted areas of the Southwest.  Birds of North America online states, "... total U.S. breeding population estimated 220–250 pairs." A search of Ebird shows two sightings of this species at Bosque del Apache in the past month, presumably this same bird.
That said a Common Black Hawk was vagrant in my town of Canon City, Colorado for a month in 2006 followed by a short visit in 2007.  You can see that bird on my post about it on my SE Colorado Birding blog that I ran prior to this blog.
SeEtta
Post a Comment
Read more 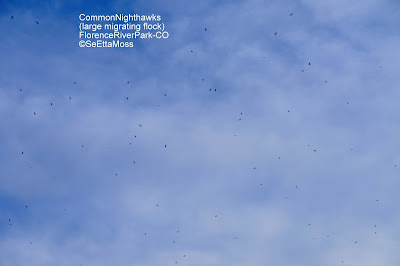 If you enlarge the pic above (just click on it) there are more than 60 Common Nighthawks in that one photo. All in all this flock of migrating Common Nighthawks totaled at least 75 and more likely 100 birds--absolutely the most nighthawks I have ever seen at one time.
Click on this second pic also to see identifiable nighthawks. When I first spotted this flock they looked like a river of birds in the sky and I thought it must be a flock of gulls as I have seen similar flocks flying kind of in a line that were gulls-and I couldn't imagine it was a flock of nighthawks, a species that has been in decline and that I have seen in smaller numbers here year after year.
Though they generally headed down the Arkansas River corridor, smaller groups of them would fly around the area as they foraged. I think the most I have seen before migrating through here was around 12 in 2014 (they flew lower so got better pics).   This was just an amazing spectacle. SeEtta