Take a minute to help pelicans in Bulgarian biospere reserve

- August 22, 2008
Though an alert for this is listed on the Fatbirder website, only 742 signatures have been obtained. It only takes 2-3 minutes to complete the form (name, email address, citizenship) so please, let's give these people a little help--this is a World Heritage site with global importance. SeEtta

Preserve our Pelicans
Nestled against the banks of the Danube in North-East Bulgaria close to the modern vibrant city of Silistra you will find the Srebarna Biosphere Reserve. Based around Lake Srebarna a natural habitat for hundreds of species of animals, birds and plants but all is not well in this UNESCO World Heritage Site. Experts are predicting catastrophic consequences for the Dalmatian pelican colony breeding site, the only of its kind in Bulgaria and for the greater Reserve as a whole if actions are not taken to ensure the ongoing and sustainable future of the Nature Reserve. Professor Nikola Mihov the local representative of the Central Laboratory for General Ecology says, ‘Biospher…
Post a Comment
Read more

While I was birding at the Alamosa National Wildlife Refuge (near Alamosa, CO), I photographed this juvenile Black-crowned Night-Heron in flight. Clearly seen in this pic are the distinctive large white spots on its' wings. SeEtta 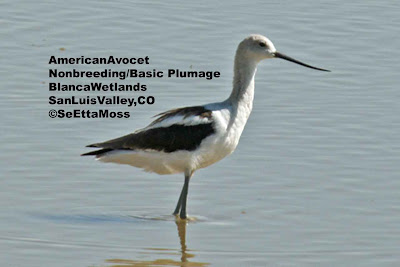 The Blanca Wetlands is breeding territory for a number of bird species including American Avocets. The avocet in the top pic is missing it's distinctive rusty head and neck (plumage for breeding season) is an adult in Basic (known as non-breeding) plumage. The avocet in the bottom pic still has a little rusty coloration on it's head but is mostly in Basic plumage. There were a few hundred American Avocets in one of the shallow lakes on the Blanca Wetlands when I was there last week-end. Double-click on each pic for close-up views. SeEtta 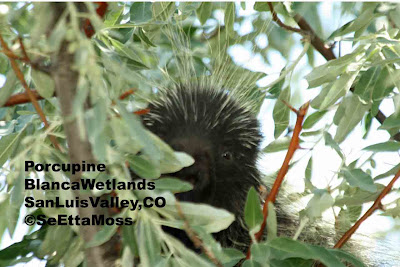 Today I returned to the Blanca Wetlands in the San Luis Valley and found this porcupine about 7 feet up a Russian Olive tree. I got quite close to get these pics as it tried to hide behind the branches.The top pic shows clearly the quills that stick out for about 10 inches from the top of it's head.The second pic shows the whole porcupine sitting in the tree. Both front feet and one of the back feet are on the left side. It's back side and tail are on the right side of the pic.

The porcupines slightly open mouth is seen in the 3rd pic. I think it was chewing on the branch with it's very sharp front teeth. They are known for eating bark and even killing trees by stripping the bark from them.For right-up-next-to-it views, double-click on each pic. SeEtta 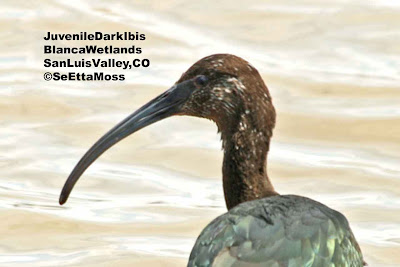 I thought I was seeing a juvenile Glossy Ibis when I saw this bird (but the species isn't known to breed in Colorado while White-faced Ibis are known to breed in several locations in the San Luis Valley), but Glossy and White-faced are basically indistinguishable as juveniles. The brown head with white on face, neck and head with brown eyes are field marks for immatures of both species. SeEtta 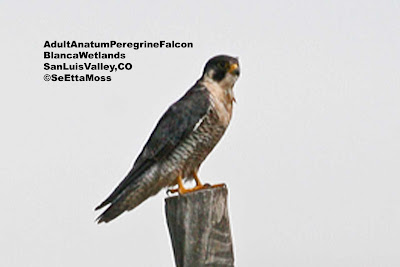 This adult Peregrine Falcon was hanging out at the Blanca Wetlands just northeast of the town of Alamosa. Blanca Wetlands are quite large and provide habitat for a number of nesting waterfowl and waterbirds which is a draw to Peregrine Falcons like this one. The Peregrine Falcon is one of the success stories for the Endangered Species Act. This species, like the Bald Eagle, suffered due to the use of DDT and other organochlorine. The Endangered Species Act provided necessary protections and recovery plans that included reestablishing birds with the significant assistance of the Peregrine Fund. SeEtta 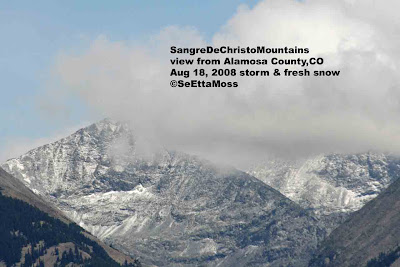 After unusually hot and dry weather for weeks, several days ago the monsoons began accompanied by most unusual cold weather setting records in several cities. I was at a campground at 9,000 feet attending a conservation alliance retreat near Monarch Pass where the highs were in the 50's and it was very rainy. Now I am in the San Luis Valley in the south central part of Colorado and it has been very stormy. Though the storms dumped a lot of heavy rain in the valley, it snowed in the high mountains. I took this pic of a storm in the Sangre de Christo mountains. SeEtta
Post a Comment
Read more
More posts