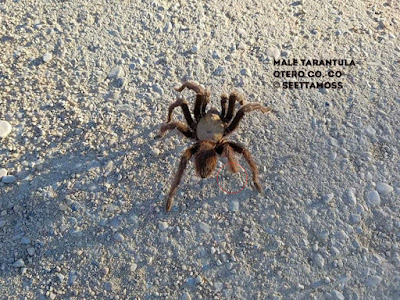 Fall is mating season for tarantulas in Colorado. Usually I find some in my town but this year I did not so I drove to just south of La Junta which has probably the most tarantulas on the move. Though I missed the big weekend for sex seeking tarantulas I still saw just over a dozen including this pretty brown one. I don't know if this guy lost part of a leg or what but see the circled area in the pic just above.
The local La Junta Tribune even had an article on this event: "The males typically are the most active, searching for the scent of females who are waiting in burrows, experts say. The male blonde tarantulas spend about 10 years reaching sexual maturity. They will mate once and then die — often at the fangs of the female whose eggs they have fertilized."
I put the pen down to provide a way to judge the size of this guy. SeEtta
Post a Comment
Read more
More posts