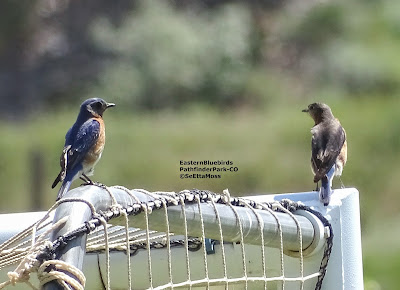 While many neotropical migrants apparently found a clear sky sometime last night to continue on their migration, there were still lots of bird diversity around the Canon City area. I found both these Eastern Bluebirds (fairly rare here though this species has bred here in the past) and the Western Tanager below at Pathfinder Park--we do often get both eastern and western species. In fact I saw Eastern, Western and Cassin's Kingbirds at that location today. Also an Ash-throated Flycatcher, a continuing Olive-sided Flycatcher, several remaining Wood-pewees (most now identifiable as Western Wood-pewees as they are singing), a few Yellow-rumped and Yellow Warblers. And from some cliffs on the other side of the river from Pathfinder Park I could hear a Canyon Wren singing it's song. More in other areas next. SeEtta
Post a Comment
Read more

Olive-sided Flycather video clip with it calling and singing 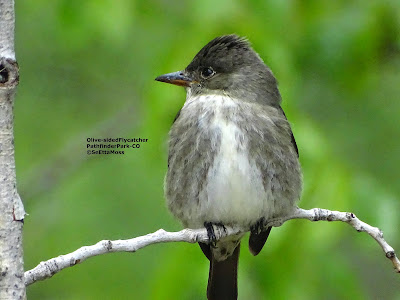 This is one of more than a dozen Olive-sided Flycatchers I have seen in the Canon City area over the past 3 days while rainy and overcast weather conditions brought this and other neotropical migrants down and effectively grounded them here. This was way more than I have ever seen during migration in the past (usually no more than a couple of them).

The top pic shows well the large head and 'vested' appearance that is a significant field mark for this species while the second pic shows the short tail but does not show the white tufts on the sides of it's rump that I saw in the field. I think that third pic best shows the large bill found on this species.
While I heard the 'quick 3 beers/free beer' song from several of these flycatchers this one sang it's 'free beer' song and gave it's 'pip,pip,pip' call frequently that I picked up in this short video clip. Interestingly 'Birds of North America' online indicates they sing when th…
Post a Comment
Read more 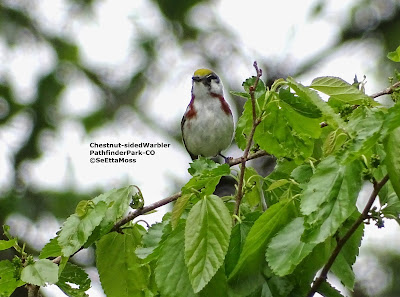 Though I have seen a lot of common warblers this is the first rare neotropical migrant I have spotted this spring. I was happy to get this photo as I not only spotted this bird from inside by car but followed it as it made very rapid moves in the canopy then photographed it out my open window. I have only seen one other Chestnut-sided Warbler in my county and that was a female in first winter plumage in the fall of 2012. And there have been less than 10 reported this spring in Colorado. I also saw a number of Wood-pewees (mostly silent so I was hopeful one might be an Eastern) and 2 Olive-sided Flycatchers--but I will post about those tomorrow. SeEtta
Post a Comment
Read more
More posts