- April 10, 2009
I have extracted salient portions of the annual crane season at Aransas NWR in Texas:

"The tenth aerial census of the 2008-09 crane season at Aransas was
conducted April 7, 2009 with USFWS observer Tom Stehn in a Cessna 210
piloted by Gary Ritchey of Air Transit Solutions of Castroville,
Texas. . . .

Today's flight tallied 103 adults + 6 juveniles = 109 total. Thus, 56% of
the flock has started the migration. Whooping cranes have been confirmed
on April 2nd as far north as Nebraska. I expect a considerable number of
cranes will start the migration in the next week. Conditions should be
ideal for departure with very strong southeast winds forecast for Aransas
April 8-9. . .

Today's flight provided evidence of 2 additional mortalities, with total
winter mortality now estimated for the winter at 7 adults and 16 chicks
totaling 23 whooping cranes, a loss of 8.5% of the flock that was a record
270 in the fall. In the last 20 years, the current winter ranks as the
worst in term…
Post a Comment
Read more 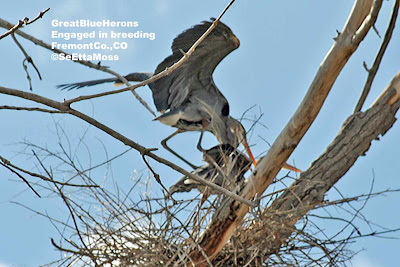 Though I have continued taking some good bird pics, I have wanted to move to a higher level with a high quality and longer telephoto zoom. I finally took the big step and my new Canon EF400mm 5.6 USM lens arrived today. I had to go try some bird pics so I drove to a herony where I have been frustrated as I hadn't been able to get very good pics because I won't risk disturbing these nesting birds by going too close even though I stay in my car to reduce disruption. So I took several pics of a small group of Great Blue Herons that were either on the nest or still building nests. Then I stopped to watch and give them a break from the noise that the electronics in digital cameras make. I was closely watching a pair that were standing very close together in their partially built nest. Then one of the herons mounted the other to engage in breeding.
I had my camera with the new lens still leaning on my window so I was able to quickly shoot a number of pics of them as they copu…
Post a Comment
Read more
More posts