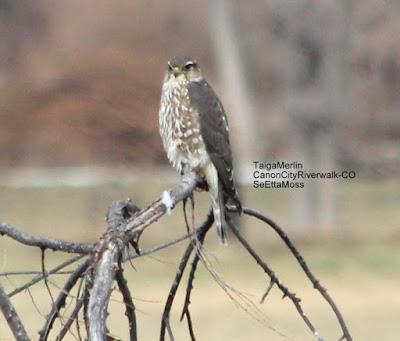 I found this Merlin last week but had computer problems so could not upload the photos. As Merlins are uncommon winter visitors in Canon City I believe it is the same Merlin as was seen by my friend Cathy near the Abbey the week before and likely the same as was seen by friend Linda on the Riverwalk before that.
I first spotted it perched in large tree on the other side of the Arkansas River from the Canon City Riverwalk where I was walking--see bottom pic for that view.
After watching it stretch and look around a lot for about 5 minutes it flew over to the river and harassed a pair of Mallard Ducks, in fact flushed them though it is way too small to be a real threat to them.
This is a Taiga subspecies of Merlin. Per Birds of North America online, "...breeds from Newfoundland to w. Alaska south into the n. US (Maine and n. Vermont, New Hampshire, and NY; n. Great Lakes states, and w. mountain states)." . SeEtta 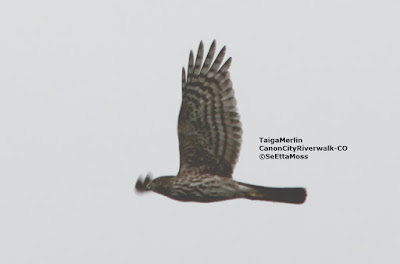 After this feisty Merlin buzzed the Mallards and chased off a couple of Eurasian-collared Doves in trees across the river, it did a neat acrobatic flight show along the Arkansas River where I caught the above shot. I took these pics almost 2 weeks ago (and had computer stop working so just got it back up and running) and haven't seen this beauty since then. SeEtta
Post a Comment
Read more 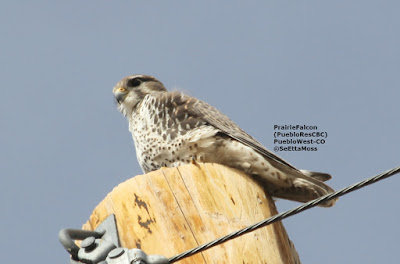 I participated in the Pueblo Reservoir Christmas Bird Count for a half day yesterday. This is one of the nice raptors I found in the Pueblo West section of the count. Strangely it flushed when I drove within 100 feet of it and it didn't flush until I was further away walking back. As it landed on a utility pole down a trail I walked down and it let me get close to the pole on foot which I would have thought would be more invasive than in a car. Anyway I got some nice pics. SeEtta
Post a Comment
Read more
More posts