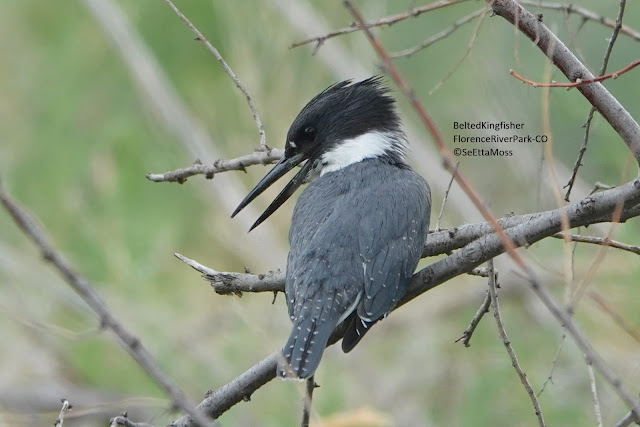 I photographed this Belted Kingfisher at Florence River Park from my car.  As the bird was behind a number of tree and shrub branches it thought it was hidden so it stayed put about 30 feet from my car (they usually flush at that close distance)--of course those branches made getting a clear shot a challenge.
While field marks of blue-gray  head and back, white collar, black dagger like bill are usually noted, often not mentioned is the small white  spot in front of each eye.  Interestingly these white spots are thought to assist their fishing skill:  "That “perfect” aim, some biologists believe, is enabled by two white “false eyes” in front of the bill. These spots may serve as sighting devices along the line of the bill, allowing the eyes to fix binocular vision on the prey, and also correcting for light refraction at the water’s surface, which makes prey appear to be nearer the surface than …
Post a Comment
Read more 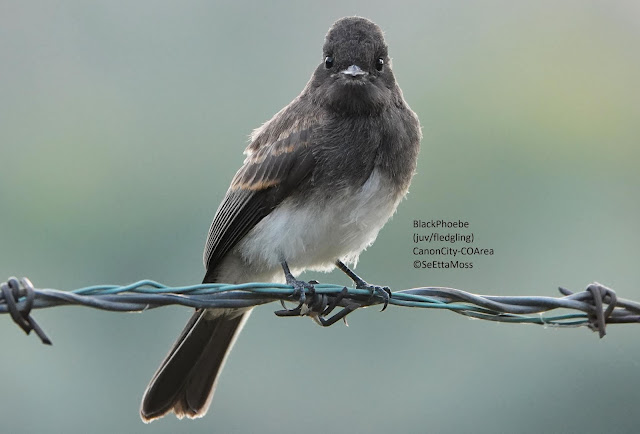 I took all these pics from inside my car after driving up to about 40 feet from one Black Phoebe. I waited patiently while it just perched quietly, then this juvenile Black Phoebe flew in to a perch less than 25 feet from me providing for such nice close-ups.   The juvenile is in spanking new plumage and it's brown wing stripes (denoting juvenal plumage) stand out nicely.
Just a bit of this fledgling's yellow flanges can be seen, but very small amount as this is clearly an older fledgling (ie, tail is not very short ).  It is even starting to show the raised crown found on adult Black Phoebes.  Also I saw the fledgling do some foraging on it's own, so it is close to gaining independence.
The adult is feeding the fledgling in the pic above.
Some of the insect that the parent bird fed to the fledgling is shown above.
Bottom 2 pics are of the parent bird. It is scruffy looking, showing disheveled feathers due to a lot of wear. The white feathers shown above are body f…
Post a Comment
Read more
More posts