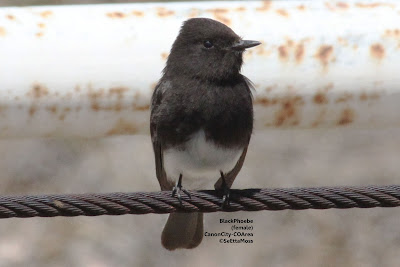 After a few days of listening to the first year male Black Phoebe singing his heart out, this female Black Phoebe showed up on March 26,2012. She wasn't there all the time when I would see the young male, but she kept coming back and soon was foraging near him (a sign of a developing pair bond). SeEtta
Post a Comment
Read more 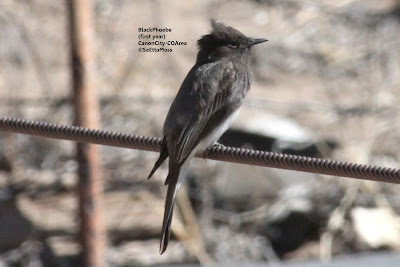 Looking a little rugged with wind blowing quite strong, this first year male Black Phoebe showed up about March 20 just east of Canon City,CO at the location where the first Black Phoebes nested in Fremont County (also a frequent nest location over the years). Not long after his arrival he began singing the Primary Song of this species which is employed for "employed for predawn song, patrolling, countersinging, station-calling, and mate association" per Birds of North America online. He continued these song bouts, which lasted several minutes in length, on a frequent basis leading me to believe he was in hopes of attracting a mate. SeEtta
Post a Comment
Read more
More posts