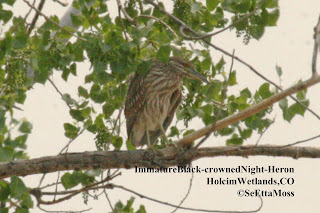 This immature Black-crowned Night-Heron is also in Holcim Wetlands. I think it is likely a first spring bird though it's plumage is similar to juvenal plumage. It flies quite well (not like young fledgling), it was out foraging on it's own, and according to Colorado Breeding Bird Atlas I the earliest fledged young recorded in Colorado was on June 21-and it takes young fledglings awhile to become as independent and skilled in flight as this bird. Additionally this birds' iris appear pretty orange which Birds of North America (BNA) online indicates would be consistent with first spring bird--"bright yellow by 20–30 d, orange-chrome by 1 yr, and bright red by 2–3 yr of age". Also it's upper mandible looks "black with greenish olive sides basally" which BNA states is found at age 1. 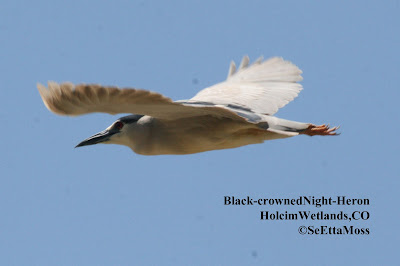 I was really happy to get this pic as one of the adult Black-crowned Night-Herons flew from the Holcim Wetlands to nearby riparian forest to roost.
Post a Comment
Read more 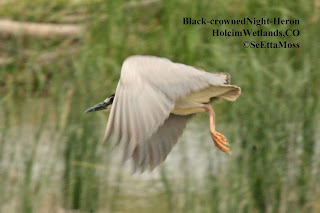 I caught these two pics of one of the adult Black-crowned Night-Herons yesterday. I thought the top pic gave an interesting view of it in mid-wing flap while the bottom pic showed the back of the bird nicely. SeEtta 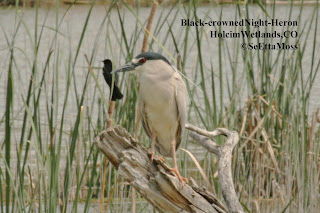 I found this adult Black-crowned Night-Heron at Holcim Wetlands just east of Florence, CO this week. Though I have seen this species in Holcim Wetlands in previous years, there was no indication of breeding nor has there been any indication of their breeding anywhere in Fremont County where this wetlands is located.
Today I found a second adult and both were foraging in the daytime, a behavior associated with nesting behavior per Birds of North America online. I also saw at least one immature Black-crowned Night-Heron and will post more about that above. SeEtta 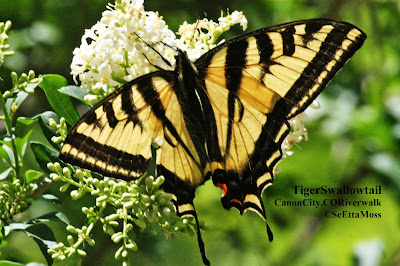 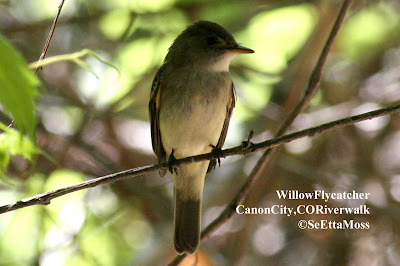 Finally I got an empid flycatcher to call loud enough that I could distinguish the call. I found this bird foraging in the riparian area near the Arkansas River by the Canon City, CO Riverwalk. I have had a number that did not vocalize and a few that called so softly (or at a distance) that I could not be sure I could distinguish it's call from similar ones. Though this empid made a soft 'whit' call, it was clearly a 'whit' that it repeated several times. The bird has a long, broad bill, no discernible eye ring,a distinct peak on rear part of it's crown, white throat that contrasts with grayish brown/olive upperparts, 2 light wing bars and moderate primary projection (eastern bird?)--all characteristics of Willow Flycatchers and the 'whit' call provides confirmation. SeEtta
Post a Comment
Read more
More posts