- July 11, 2009
I found several Yellow Warbler parents feeding their fledgling offspring at Pathfinder Park near Florence,Colo.
The bird in the middle pic is the same fledgling being fed in the top pic and is shown with wings out as it begs for food. The parent and fledgling in the bottom pic are a different pair of Yellow Warblers and I caught them in the act of transfering some green-colored insesct. SeEtta

- July 11, 2009
I saw 2 juvenile Black Phoebes in Pathfinder Park near Florence, Colo yesterday. I think it these are most likely the same two juvenile Black Phoebes I posted about on July 3. They each still demonstrate the brownish wing bars and brownish tips on secondaries and primaries which are clearly seen in these pics.The Black Phoebe in the top had been sallying over a wetland and stopped to fluff out it's feathers providing an interesting view. The bird in the bottom pic was still working the riparian edge by the Arkansas River where I first spotted both of these birds. SeEtta
Post a Comment
Read more

- July 08, 2009
This is the time of year when baby birds are everywhere--in nests, learning to fly and falling on the ground. These pics are of a Western Kingbird nestling that left it's nest prematurely, whether by falling out or being pushed out of the nest. It was an older nestling that is fully feathered (it even looks like a W Kingbird) but check out the very short tail. I spotted it as I drove down a country road and stopped to put it in a less hazardess location. Though it was just mostly a ball of fluff, it had a good size beak that it used to protect itself with quite well. I had to get an old sweatshirt out of my car to pick it up in so as to avoid being pinched. Both pics are of good quality, especially the bottom pic which has excellent resolution, so do double-cick on them for a great super close-ups. SeEtta
2 comments
Read more

Driver plows into birds on beach 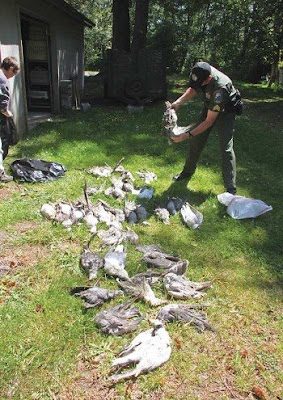 By HUGH McKENNA
For The Daily Astorian

OCEAN  PARK, Wash. - A speeding motorist plowed through flocks of birds on the beach near Ocean Park Friday, killing more than four dozen gulls, terns and other species.

On Sunday, Sharnelle Fee, director of the Wildlife Center of the North Coast, east of Astoria, tended to the lone survivor, a Caspian tern with a splinted right wing.

Fee also helped Sgt. Dan Chadwick of the Washington Department of Fish and Wildlife sort 35 carcasses by species, laying the bodies on the lawn at the center east of Astoria.

A volunteer with the rehabilitation center found the dead and injured birds Friday afternoon and brought two injured but live birds and the carcasses to the center. One bird was too badly injured and had to be euthanized. The volunteer reported seeing more dead birds that were being washed out to sea and could not be recovered.