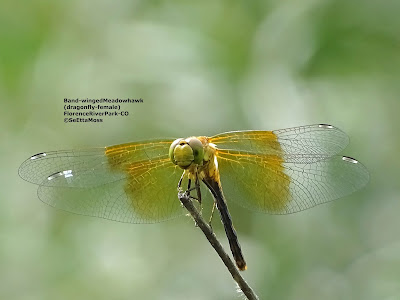 I photographed this female dragonfly, a Band-winged Meadowhawk, at Florence River Park this week. "This meadowhawk is named for the band of amber color near the base of the wings." (from http://thedragonflywhisperer.blogspot.com/2013/09/band-winged-meadowhawk.html). The males are red and females like this one are yellowish. Band-winged Meadowhawks are approximately 1- 1.5 inches in body length with wings about 2 inches across (from https://en.wikipedia.org/wiki/Band-winged_meadowhawk). SeEtta
Post a Comment
Read more 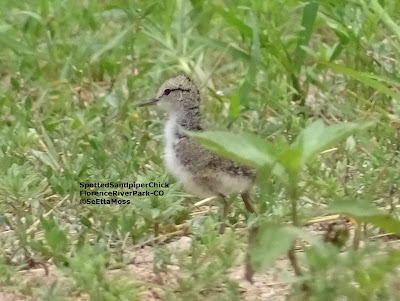 Two days when I went to check on the Spotted Sandpiper family at Florence River Park I thought they had likely perished--there were two men engaged in gold panning right where the parent sandpiper had been and they had dug some of the sand from the bank where I last saw the sandpiper chicks. Arggh, I was afraid that all this activity, plus a large off leash dog with these people, would have scared the parent away and even if the chicks were successful in hiding in the vegetation they would not survive without a parent at their young age. What a surprise when I returned that evening for one last check to be accosted by the parent sandpiper calling loudly and challenging me by walking right towards me (and my dog). It took awhile for the parent to settle down and for one of the chicks to walk in some grass where I could spot it--the parent had moved the chicks about 150 from the river into an area with a lot of vegetation. I returned day before yesterday and refound the parent and …
Post a Comment
Read more 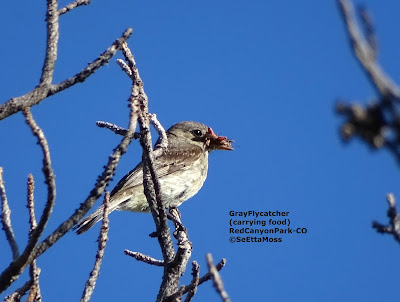 I drove up to Red Canyon Park this evening as I have not been up there for a month or so. I spotted several Gray Flycatchers, the specialty bird species here, but they were very shy. This one with what looks like a dragonfly in it's bill would not deliver this food to it's offspring with me around. I walked 50 feet away but it did not budge so I left. I suspect the others still have babies in the nest or fledglings they are taking care of.
There were several Lazuli Buntings singing near the park entrance and more by Four Mile Creek near the park entrance. Also Blue Grosbeak singing in that area. Plus I found a likely pair of Evening Grosbeak (two adults perched together in breeding season) in the park. Not bad for early evening in July. Arggh, but the nasty gnats were out in force, had to stuff pieces of a paper napkin in my ears to keep them out of that sensitive location. SeEtta 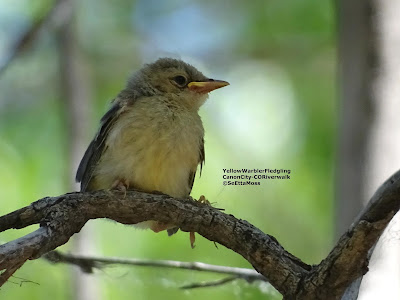 Summer is such fun with all the newly fledged youngsters that look so little like the adults of their species to add a lot of challenge to identification. Fortunately if one can locate the parent doing the feeding as I did for this recent fledgling the identification is obvious--these Yellow Warbler fledglings followed their dad from tree to shrub, begging to be fed. The male bird was very busy finding food for them and also getting them to follow him to a safer location off the main river trail of the Canon City Riverwalk (actually I stood guard for awhile to let these birds move across the trails to further from the trail as many walkers coming by had large dogs that could if nothing else step on one of the young birds). SeEtta

- July 19, 2015
Agitated Spotted Sandpiper from SeEtta Moss on Vimeo This is the parent Spotted Sandpiper that gets agitated as I try to walk the trail past where it's chicks are hidden. Unlike Killdeer it does not try to track me away from the chicks but comes right towards me. At the end of short clip it gets even closer as it flies past me. Once it flew past I walked on away from the area. SeEtta
Post a Comment
Read more
More posts