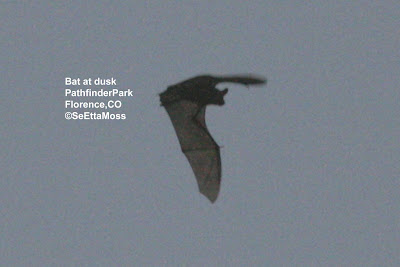 For the last 4 nights, I have enjoyed watching a bat spectacle east of Canon City. There were more than a hundred bats foraging over the small fishing pond at Pathfinder Park just west of Florence. The only times I have seen more than a few bats flying at one time is at Carlsbad Caverns and private bat caves in Texas so this has been most unique. Though not in large numbers, there were also bats foraging over a quiet section of the Arkansas River near there. I can personally vouch for the fact that there were plenty of mosquitoes for them to feast on. It is astonishing to watch them flying in such density as they appear to fly in an erratic manner (maybe due to chasing mosquitos and other insects?) which often requires fast flight corrections to avoid collisions with each other, and also with me on several occasions. I called our local Div of Wildlife biologist and she said this number of bats may indicate a nearby nursing colony. I had a heck of a time getting some reasonable b…
Post a Comment
Read more

Close visit from an Eastern Phoebe

- August 05, 2009
Yesterday when I got to my friend's to walk my dogs, I was delighted to see that an Eastern Phoebe had flown in and perched less than 20 feet in front of me providing a great photo opportunity. These are pics of that bird, a juvenile (see cinnamon-ish wing coverts that make weak wing bars and buffy edges on tertials). The bird did have a slight yellowish wash on it's belly but it didn't come through in the pics (probably due to the light). These pics enlarge very nicely so double-click on each one for super close-up views. SeEtta 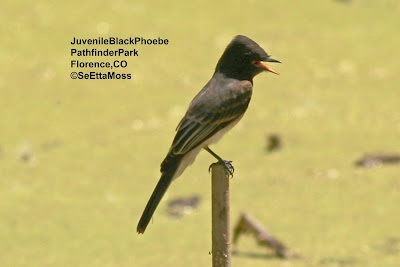 I was pleased to refind both of the two juvenile Black Phoebes that I first found at Pathfinder Park near Florence, CO at the beginning of July. They were foraging in the wetland area, sallying after insects within a foot or so of each other with limited indication of aggression (each had it's crest raised a few times and they did engage in a brief chase. Even after the apparent hostile chase, they both remained in this small wetland area though they foraged further apart. These pics are of each of the two juveniles. Though they clearly look alike, the bird in the bottom pic appeared to have rustier colored wing coverts that were more visibly contrasting. Notice the orangish/fleshish colored mouth lining still present on the top bird. SeEtta