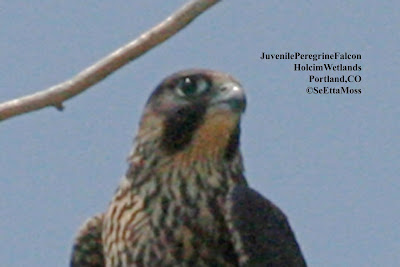 This pic was nice at showing the the head of a juvenile Peregrine Falcon. Important field marks that can be seen in this pic are the blue cere and orbital skin--these change to yellow beginning in the winter of the bird's first year. Also the streaking on it's chest is a field mark for juvenile Peregrine's (while adults have spotting and barring). SeEtta
Post a Comment
Read more 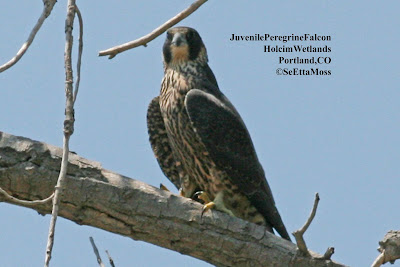 I believe it had field marks consistent with a juvenile "American" (F.p. anatum) Peregrine Falcon described in detail in Brian Wheeler's Raptors of Western North America (p. 474--not the 'lightly marked type').
Field marks consistent with this subspecies that are evident in these pics include: a 'wide type' malar mark that blends with it's dark cap; a dark forehead with a "narrow tawny patch"; nape is a mix of dark coloration and some pale patches; it has tawny auriculars; the ventral part of it's body is "rufous-tawny with moderately wiede dark brown streaking on the breast, belly and lower belly"; the flanks I could see well are streaked; the leg feathers are tawny with pretty wide markings (Wheeler says "streaking" but that isn't clear in my pics); the dorsal portion of the wings are dark brown and there are tawny colored edging on the coverts; the ventral portion of the remiges are dark with pretty wide rufous …
Post a Comment
Read more

New Peregrine on the block 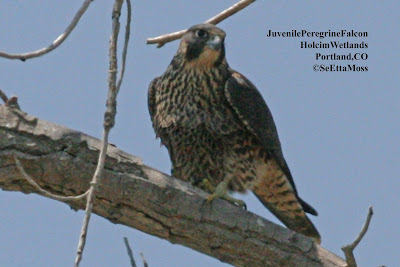 Today while checking for late nesters on my Colo Breeding Bird Atlas block east of Florence,CO, I saw this juvenile Peregrine Falcon fly down the Arkansas River and into some adjacent cottonwood woodlands in pursuit of a meal. It apparently was unsuccessful and perched in a tree where I took some of these pics.
While perched, the apparent resident Redtail Hawk flew nearby calling it's displeasure at this competition in it's hunting grounds. Though the Peregrine didn't leave, it was clearly paying attention as it moved it's head in a manner I have seen done by Great Horned Owls which was amusing when done by a falcon.
The juvenile took off two more times and attempted to catch a bird but still unsuccesful. It's a hard life for juvenile raptors learning how to hunt. Most of these pics will enlarge for nice close-ups so just double click on each pic to really see the field marks well. SeEtta

- August 09, 2009
On 8-4-09 I found these Black Phoebe fledglings near the MacKenzie Bridge over the Arkansas River on the east edge of Canon City, CO. Earlier this summer I found fledglings being fed by a parent right where I found these new fledglings. So it is most likely that the same set of parents renested and these are the offspring.
I found at least 3 fledglings and possibly 4 but don't know if each of the pics is of a different or same bird. Each pic does show a characteristic of Black Phoebe fledglings. While the top pic is less than sharp, it does show the almost straight line between the black breast tne white belly, a characteristic that provides clues to the age of the bird as this line becomes more like the 'V' that is characteristic of adult Black Phoebes. In the second pic, you can see clearly that the tips of the tail feathers (rectrices) are not rounded like they are in adult birds. This pic also shows the darker black of Black Phoebes in juvenal plumage compared to…
Post a Comment
Read more
More posts