Showing posts from September 4, 2016
Show all 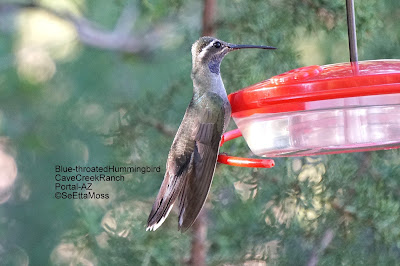 Yesterday I had a great time in Cave Creek Canyon near Portal,AZ watching Blue-throated Hummingbirds. They were coming into feeders at both the Southwestern Research Station and at Cave Creek Ranch. There were several of these beauties at each location.
AllAboutBirds.org says, "The largest hummingbird found north of Mexico, the Blue-throated Hummingbird is also one of the most vocal hummingbird species, and its high-pitched, monotonous peeps are a signature sound of summer. They are found in streamside habitats in mountain canyons, as far north as southeastern Arizona, where they are frequent visitors to feeders and usually the dominant hummingbird species. "
They clearly were very large and their calls most distinctive; however, in my limited experience they were not the dominant species at least at these feeders.


While fairly common in Mexico these beauties have a very restrictive range in the U.S. as shown in this NatureServe range map. SeEtta
Post a Comment
Read more
More posts