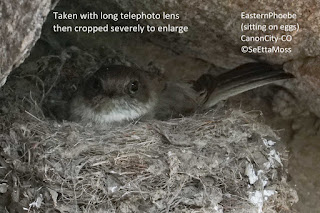 This apparent Eastern Phoebe is clearly sitting on eggs.  Her mate was nearby.  As noted on the pics I took these with a long telephoto then cropped them to further enlarge them.  I also took them from inside my car to reduce disturbance and stayed less than a minute.  I comply with Nestwatch.comNest Photography Guidelines.

I don't know for sure why there appears to be a white area around the bird's neck, but maybe due to it's pushing itself into the nest to be on right on top of the eggs causing down feathers (underfeathers) to show.  In the top pic the vegetation and some of the mud that holds it together can be clearly seen.  In the bottom pic note the nest is actually built on top of prior years' nest, while noted as repaired nest at least one involves adding nest material on top of what is remaining from previous nestings.  Note:  best viewed further enlarged, just click on each pic. SeEtta
Post a Comment
Read more
More posts