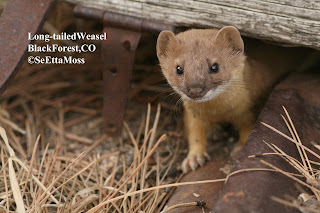 This little weasel was very curious, surprising me that it would come so close to me (less than 15 feet). It even came this close to me as I was standing by my car in which was my dog--and the weasel clearly saw my dog. I have read now that they are very curious critters. This location was in the Black Forest of Colorado, at an elevation around 7,500 feet, that has a lot of Ponderosa pine trees with some adjacent short-grass prairie. More pics and info tomorrow. SeEtta 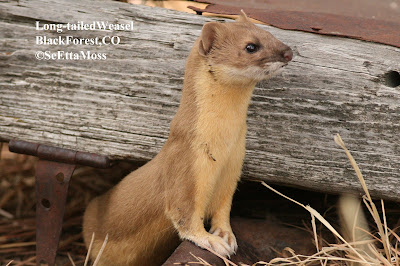 I was delighted to see this Long-tailed Weasel today as it has been a long time since I have seen one, presumably because they are more common in Colorado at higher altitudes than I frequent and because they said to be more nocturnal (though not exclusively). It is interesting that when little guy appeared a Mountain Chickadee flew into a tree above calling repeatedly (weasels predate bird nests and anything they can catch so clearly not welcomed by local birds). SeEtta
Post a Comment
Read more

- June 17, 2011
I wasn't sure as I filmed this if one of the 2 planes I saw was a slurry bomber. It was and it drops the reddish colored fire retardant on the trees at the edge of the fire. SeEtta
Post a Comment
Read more

- June 17, 2011
In this clip the extensiveness of this wildfire is shown and I comment on it about how much more fire was there that I hadn't seen until now. SeEtta
Post a Comment
Read more 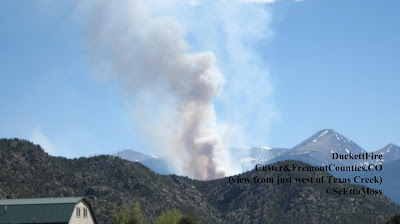 I took the top pic from a short ways west of Texas Creek (this turns out to be just the north section of the fire)and the Duckett Fire sure gives an impressive show as it rises in a tall and dark column into the sky.
I took the middle pic from about 5 miles away, and at a higher elevation than the fires, providing some perspective on the overall breadth of the fire--I was really surprised to see just how much more extensive the fire was than what I had seen near Texas Creek and other locations before getting above it.  Even as large as it looks in this view, the south section (shown below) is to the left of the photo so not pictured here.
And I focused in on the south section of the fire, the furthest distance from me. The fire had blown up and produced this very large plume-wow.  SeEtta
Post a Comment
Read more

Wildfire--Duckett Fire: short video clip from about 7-8 miles away

- June 16, 2011
Another short clip of the Duckett fire that I took yesterday from a little closer, maybe 7-8 miles away (tho I say 10 or more miles away on the video clip, distance is deceptive and when I measure it on google maps it is a closer than I thought). SeEtta
Post a Comment
Read more

- June 16, 2011
Another short video clip of the Duckett Fire, this time a little closer-8-10 miles away. SeEtta
Post a Comment
Read more

- June 16, 2011
I took this clip from the Texas Creek area which is about 12 miles away from the north part of the Duckett Fire and the rising column of smoke seen here. SeEtta
Post a Comment
Read more 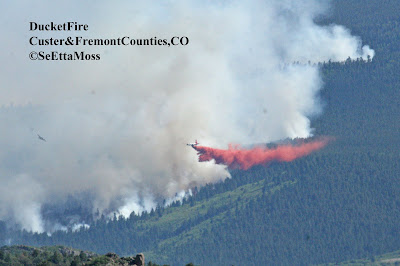 The top pic shows the slurry drop of fire retardant which is colored bright reddish. The bottom pic shows the bomber (on the left) flying off and the plane that is the in-air control towards the top of the pic as the slurry continues falling to the trees. SeEtta 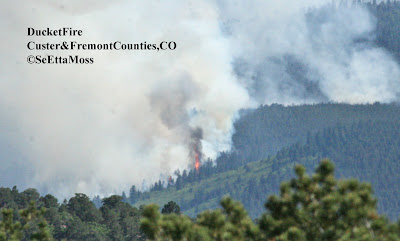 This wildfire has burned about 1,500 acres about an hour west of where I live. I drove up that way this afternoon to check on some nesting birds and on some BLM areas that get a lot of destructive off-road motorized activity. I saw the fire and went up a rugged county road to get a few photos of illegal off-road motorized abuse which put me in a great spot to get some photos and video of this wildfire. Both of these pics show trees 'torching'. More to come. SeEtta 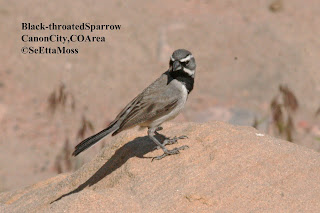 Bubbly Bobolink (what big feet you have) 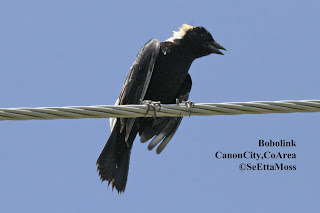 I got this photo of one of the 4 Bobolinks I have saw in a hay field in the Canon City area today. I love their bubbly song and this one was singing away when I took his photo. I was quite impressed the the good size feet, and especially long toenails, it had so enlarged the pic to show these. I also heard, then saw (usually occurs in that order) in the same fields-this was the first I have seen of this species here this year. Unfortunately the farmer is mowing his hay fields and started on the field where 3 of the Bobolink have been. So they and the Dickcissel are likely not to be around much longer. SeEtta 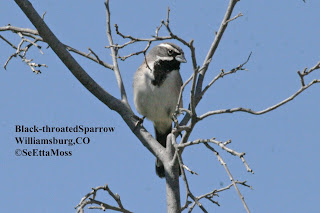 This morning I was able to watch 3 Black-throated Sparrows as they either foraged (only one agonistic interaction), or possibly looked for nesting material inside/under deciduous shrubs but I believe there may be more birds in this area. I heard at least one singing again this morning but only a few times so the birds may already have nested. I watched the one in the bottom 2 pics as it loafed for more than 5 minutes in the shade and it might have continued except that it was hot so I started walking back to my car which appeared to prompt it to start moving again. SeEtta
As noted in the pics, these birds were located in Williamsburg which is a very small town a few miles south of Canon City. Though these birds are located within the town limits that is only a technicality as the area is actually quite rural with only one house within a mile of this location. SeEtta 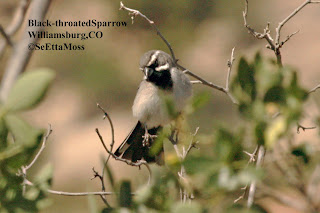 I was very pleased to find Black-throated Sparrows in one of my Colo Breeding Bird Atlas priority blocks just a few miles south of Canon City,CO. In July, 2009 I found 5-6 Black-throated Sparrows, including several juveniles, in this area. Though I believe this species likely nested here I was unable to find any evidence beyond finding this apparent family group during breeding season and did not find any last year.
Yesterday morning I first spotted two Black-throated Sparrows flying down a dry gulch very near where I first spotted one two years ago. They 'disappeared' after flying into some cholla cactus. Then last evening when I was in that area watching to see if a reluctant young Common Raven would finally fledge, I spotted a Black-throated Sparrow and it was singing (I got some video but haven't uploaded it). The light was poor so I didn't get any still pics until this morning when I took these. More follow. SeEtta