- May 02, 2014
Up to a few pairs of Northern Cardinals have been resident in Lamar, CO for some years. Today I saw both a male and female moving about the Lamar Woods area together, presumably a mated pair. I spotted this male as he was grooming, and thinking he was hidden behind some branches of a tree. I stayed very quiet and took these intimate photos through the branches as he preened and postured.
I had to include these wild guy pics as he shook out his feathers. Later I heard a Cardinal singing, ah, love is in the air and this guy was as handsome as he could be. SeEtta
Post a Comment
Read more

Townsend's Solitaire, a montane bird that likes lower elevation during winter (and spring)

- May 02, 2014
I found this Townsend's Solitaire, a 'drab winged' bird per Sibley, in Fairmount Cemetery in Lamar this morning. Though they breed in higher elevation forests they do an altitudinal migration during winter. Checking ebird records it is not uncommon to find this species in Lamar in early May. SeEtta
Post a Comment
Read more

- May 02, 2014
Red-bellied Woodpeckers are resident in Lamar Woods, a hotspot behing the Lamar Community College but are always high up in tall trees. I found this one in Fairmount Cemetery which is which is close to Lamar Woods. The bird was in one of their smaller evergreen trees so got great views and this photo. SeEtta
Post a Comment
Read more

- April 30, 2014
This shy Hepatic Tanager was a nice surprise this morning in the 'Lamar Woods' migration hotspot in Lamar, CO. The winds, while not quite as horrendous as yesterday, were still very strong and this tanager stayed mostly in thickets.
Seen in these photos are the blackish stout bill, bright orangie-yellow throat and forehead, and grayish auriculars grayish flanks that are field marks for this species that is rare in eastern Colorado. SeEtta
Post a Comment
Read more

- April 29, 2014
I first saw this Broad-winged Hawk flying in strong winds this morning in Lamar, CO. A little later I spotted it fly in to a tree and perch. With the terribly strong wind gusts (up to 63 mph today) in Lamar I can't imagine how difficult it is for this and other birds in this nasty windy weather. SeEtta
Post a Comment
Read more

Green-tailed Towhee in my backyard 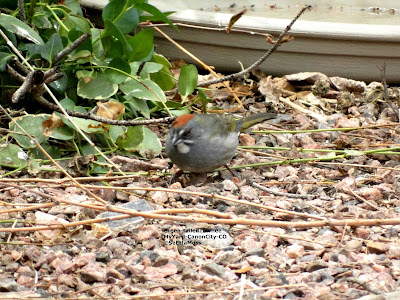 This morning I spotted this first of the year Green-tailed Towhee foraging under my thistle feeders. But it was very shy--though I was very careful opening my back door carefully, it flushed each time. So had to take these photos through the glass in my back door, not the way to get the best photos. And yesterday I had a first of the year Lazuli Bunting singing in my neighbor's tree. SeEtta
Post a Comment
Read more
More posts