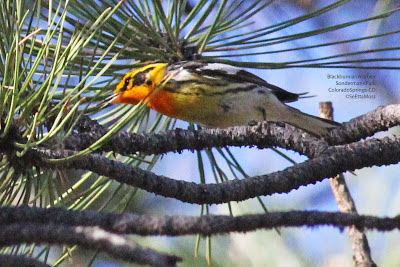 When I checked my email on my smartphone this morning I saw that a Blackburnian Warbler had been refound in Colorado Springs at the Sondermann Park there. I was on my way to that city to do some errands and shopping so I decided I would go look for it at end of the day when I finished my other tasks. I only had to drive about a mile out of my way on the drive back through Colorado Springs to get to the park. Though I wasn't sure the light would be good for viewing and photos since I didn't get there until almost 6 pm, it worked out ok and the late afternoon sunshine though it only shone on parts of the trees where the bird was foraging provided nice color when I got the bird in the light.
Most of the time I watched this rare warbler it foraged in the tops of a deciduous tree but it flew to a tall pine tree where I got the top pic.

While the reduction in sunlight made some shots too dark to post, more challenging was the almost constant movement and erratic movement …
Post a Comment
Read more

- May 24, 2013
I found this male American Redstart in a Colorado hotspot called Tempel Grove located just south of Negronda Reservoir and along a major irrigation canal. Unlike much of this and other irrigation canals there is a lot of vegetation, both trees and shrubs, that the Tempels had to fight the canal company to keep (irrigation companies routinely destroy vegetation along canals to reduce water loss). Melody Temple, who is now deceased, loved birds and her husband has dedicated the birding trail area along the canal that is generously open to birders in her memory.

This male American Redstart in his striking breeding plumage was feeding in some of the trees just off the canal (currently empty). It has what looks like a fly in it's beak in the top pic. The only other warbler I found there was a Hooded but I only heard it sing twice and did not find it visually. SeEtta
Post a Comment
Read more

- May 24, 2013
While this male Blackpoll Warbler, another rarity in Colorado, was not nearly as accommodating as the Magnolia Warbler, I did a couple of good shots. Though not brightly colored it is still stunning in it's crisp black and white breeding plumage. This was in the same area of southeastern Colorado (Van's Grove) as the Magnolia. SeEtta

- May 24, 2013
This Magnolia Warbler appeared to pose for photos. SeEtta

- May 23, 2013
I found this male Magnolia Warbler at mid-day at a local hotspot called Van's Grove in Bent County, CO. Thanks to having to drive through Pueblo plus 4 small towns along mostly 2 lane H50 it takes over 2 1/2 hours to drive to this location (plus I had to make several stops in Pueblo) so I didn't even get there until almost 1 pm. I spotted a second and different warbler but had not been able to see it for id when a local birder, Duane, drove in. I was trying to find a photo of the other warbler but Duane told me that another birder, Eric had been there early this morning and called him to let him know he had seen a Magnolia and a Blackpoll Warbler there (I got good looks at it later and photos that I will upload after the Magnolia photos).

Duane said he only had a few minutes as he was going to work. After several minutes of looking I refound the Magnolia and got Duane on it. This bird was very cooperative as we watched it for several minutes. Later as I was trying to …
Post a Comment
Read more

- May 23, 2013
This is one of several bats I watched flying at dusk tonight near the Canon City Riverwalk. I am hopeful it will be identifiable from these photos.  These were pretty large bats with a wing span of 12-18 inches. SeEtta
Post a Comment
Read more

Red-tailed Hawk with nestlings in cave nest on cliff

- May 22, 2013
This Red-tailed Hawk has her nest in a cave about a hundred feet up a steep hill and on a cliff. She has two young nestlings seen in these pics.

As can be seen in the second pic (photo before I crop it tightly to enlarge it) the nest is very large. This nest has been used intermittently over the past 7 or 8 years and new nesting material just gets added to what is left from previous nestings.

My camera and lens combo I used for these pics provide the equivalent of about 900 mm or 16x's the view with our eyes so even before I crop the photos they are very enlarged. This allows me to take photos with less disturbance to birds especially important for nesting birds. SeEtta

Push of MacGillivray's Warblers into Canon City past few days

- May 21, 2013
This is one of 3 MacGillivray's Warblers I found this morning on the Canon City Riverwalk (on the half mile of the bluff trail from Sell's trailhead to half mile sign). It had caught a greenish worm/caterpillar down in the leaf litter and has it in it's beak in these pics.

I only had of them yesterday but had 4 the day before with most near the McKenzie trail end. Coincidentally (?) birders in Lubbock, TX reported a fallout of MacGillivray's that same day. Though Lubbock is several hundred miles southeast of here some of our migrating birds likely come up through that area. SeEtta
Post a Comment
Read more

- May 21, 2013
This female American Redstart was found yesterday morning by local birder Rich. I refound it a little later but it stayed in the thick vegetation and didn't fan it's tail much.

Today it came out in the open more and fanned it's tail constantly as is characteristic of this species.

As shown on the photos she has large yellow base to tail feathers, yellow on sides, no apparent yellow on wings but some under her wings and along sides which is indicative of a first year female American Redstart. SeEtta
Post a Comment
Read more

- May 19, 2013
I feel bad that my persistence in trying to identify and photograph this subadult Broad-winged Hawk caused it to fly off away from the riparian forest that provided good stop-over habitat and hope it flew to another section of Canon City Riverwalk. This is a photo of it in flight. It shows a moderate amount of dark streaking on it's underparts, some barring on remiges, a wide dark read edge to wings plus barring on tail as noted earlier. SeEtta
Post a Comment
Read more

- May 19, 2013
The top photo of this subadult light morph Broad-winged Hawk shows the whitish supercilium, light auriculars and dark malar stripe quite well. And the wingtips show as quite a bit shorter than the tail tip. SeEtta