Another Painted Redstart-molting from juvenal to adult plumage 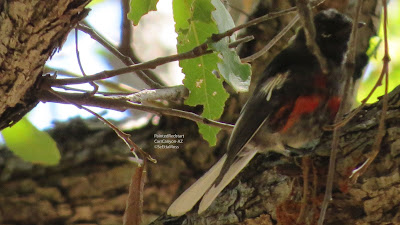 This is another Painted Redstart I saw in close proximity, in the same tree, to an adult Painted Redstart today. Juvenal plumage has no red but this doesn't appear to be in (adult) Definite Basic plumage. So I suspect that this might be a first year bird that is molting from juvenal to Basic I plumage. SeEtta 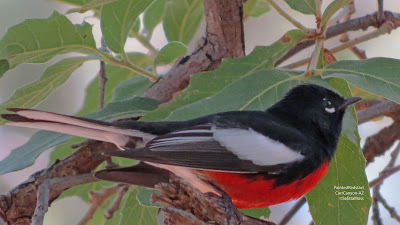 After some birding a little this morning along the San Pedro Riparian area, the quickly rising temps and slow birding motivated me to head for a little higher elevation so I decided to try birding further up in Carr Canyon than the residence with the Plain-capped Starthroat I watched yesterday. I ended up at a moderate elevation not far inside the Coronado National Forest where I followed a small flock of Bushtits that intercepted a very nice mixed flock of passerines. In that flock were at at least 2 Painted Redstarts, one for sure an adult as shown in these photos. At least redstart was a juvenile which I post above and likely a second adult. These adults are just stunning. SeEtta 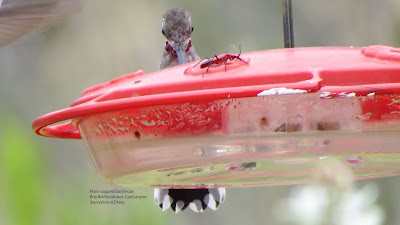 Though the Plain-capped Starthroat is not as colorful as some of the other hummers, the white stripes on it's head, it's large size and very long bill distinguish it. Another distinctive feature the large white tips on it's outer tail feathers that show nicely in this photo.  The species has a variable amount of red on the throat area.  BTW, I have no idea what kind of bug that has photo bombed this and another photo of the hummer. SeEtta
Post a Comment
Read more 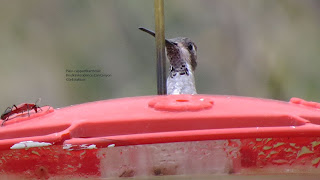 The Brodkins who have a residence in Carr Canyon a short distance south of Sierra Vista, AZ have had a Plain-capped Starthroat visiting their hummingbird feeders since yesterday. This species is a rare visitor from Mexico that has visited the feeders at this and nearly residences in and near Carr Canyon in previous years. Several other birders and myself were treated with brief views as this hummer tried to get some sugar water though it only got to perch for short periods as other hummers repeatedly chased off this more timid but larger hummingbird. SeEtta 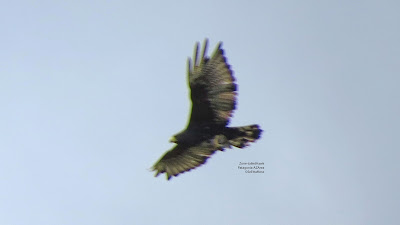 While I was birding on Blue Heaven Road just a few hundred yards south of the Paton's yard I spotted this raptor that looked like a possible Zone-tailed Hawk. It was an adult Zone-tail--showing it's barred remiges, bright yellow cere and white tail bands in this photo- but it's feathers were in pretty condition. I looked up info on their molt cycle on Birds of North America online which noted that this was not well understood for this species but, "In Arizona, primaries and tail are renewed in Aug." That certainly fits for this bird.  Features can be seen better by clicking on photo to enlarge it.  SeEtta
Post a Comment
Read more 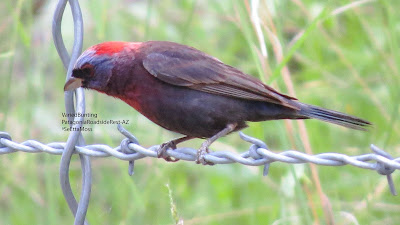 Another neat find today and another lifer species--Varied Bunting. This is the distinctive male but first saw the female (see next post). After finding the Thick-billed Kingbirds along the north end of Blue Haven Road in the Patagonia, AZ area I stopped again at the famous Patagonia Rest area to see if I might find more there. Though I didn't find any more of them, I did find this male and the female Varied Bunting. Though reported in other areas of SE Arizona I have not seen any reports of them at this location so another lifer species I found myself and in an area not previously reported. SeEtta 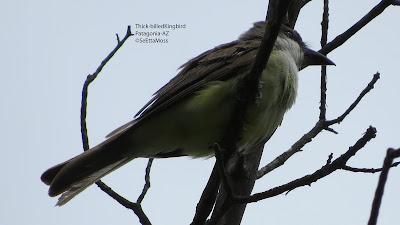 I had hoped to get to see a Thick-billed Kingbird when I traveled to the Patagonia, AZ area today but it had not been reported since last week at the famous 'Patagonia Roadside Rest' where it had most recently been observed. I tried that location this morning on my way to Patagonia Lake State Park (where I went to see the Blue-footed Booby and did) but no luck. This afternoon I decided to check the Blue Haven Road, that runs from Paton's through the Nature Conservancy's Patagonia-Sonoita Creek Preserve, for Zone-tailed Hawk. I did looked south of the Preserve where Thick-billed Kingbirds have been found but no luck.
Then when I was looking for a Gray Hawk I heard north of the Preserve on that road I heard a repeated call I did not know so I stopped to check it out--it was a call of this Thick-billed Kingbird. Then a second Thick-billed Kingbird began calling also but I did not locate it visually. It appears that this is a first fall bird due to the yellowish …
Post a Comment
Read more

Quail roosting in shrubs outside my motel room 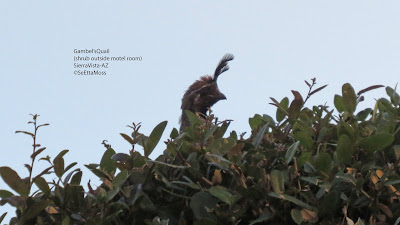 I was surprised when I opened my motel room door as I saw a Gambel's Quail jump up into a tall shrub--after perching on the top it wiggled through the leaves to inside the shrub where it is totally not visible. What an interesting adaptation--the quail are roosting in the shrubs around the courtyard of this motel where they are not visible to people and have protection from predators that are unlikely to come this close to humans to seek them out. They come from some vacant lots around my motel that have mostly desert habitat. There were about 2 dozen Gambel's Quail that worked their way to the many shrubs here, some walking right by the pool to get to the shrubs and some perching on the pool chairs then flying into the shrubs from the chairs. I had a blast watching them. SeEtta 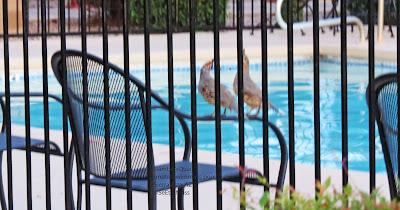 Sorry that the quail in the photo are a little blurry but they came to the pool at my motel at dusk. In fact there were Gambel's Quail walking next to the pool with guys sitting on lounge chairs either not noticing or not interested. I have been delighted with the neat birds around my motel (others are Curve-billed Thrashers, lots of Cactus Wrens and even Greater Roadrunners) These two took advantage of pool chairs to perch on. Why were they there-see next post. SeEtta
Post a Comment
Read more
- August 27, 2013
I found this Prairie Falcon perched on a utility pole along H80 north of Rodeo, N.M. I took these photos from inside my car and I'm pleased to report that when I left the falcon was still on it's perch (my goal is to not flush raptors from their perches). Prairie Falcons appear fairly rare at this time of year in this area per ebird and Finding Birds in Southeast Arizona. SeEtta
Post a Comment
Read more 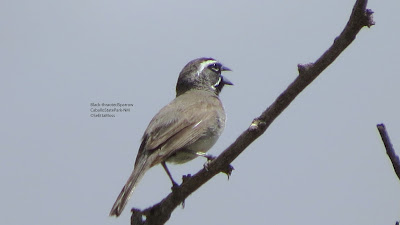 On my drive to SE Arizona I stopped at Caballo State Park in New Mexico. There was a recent report that a birder saw a Blue-footed Booby fly towards the lake in the park so I thought I would stop and take a look for it since I was driving by on I-25. I didn't see any bird that looked like a booby but was delighted to find this male Black-throated Sparrow singing his heart out in the desert scrub in this park. Like many male passerines this species sings mostly in association with breeding or territorial behavior. It seems a little late for breeding behavior but I did watch this bird engage in some chasing behavior with what looked like another Black-throated Sparrow. They do have a second nesting in association with monsoonal rains which Birds of North America online states, "Common in years of adequate rainfall and prey items." Though this is later than their documentation, there has been significant monsoonal rains in the area recently. I also saw another ma…
Post a Comment
Read more
More posts