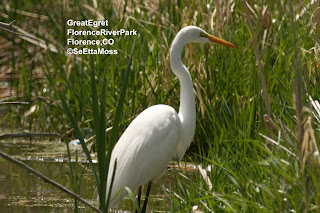 Yesterday I also found this Great Egret, the first I have seen this year and the first reported in Fremont County, CO. It was feeding in the wetlands in a small park in Florence, CO which is less than 10 miles from Canon City.
Much of the birding in Florence River Park crashed after the town cut out almost all the tamarisk, an invasive plant, which composed most of the understory to the nice cottonwood riparian area adjacent to the Arkansas River (instead of staging the removal and replanting native vegetation to provide continuing habitat for neotropical migrant songbirds that used to frequent the park). Fortunately they did not enter the wetland area of this park to go after tamarisk plants so it still draws some birds (though this is the first time I have seen a Great Egret in that wetland). SeEtta 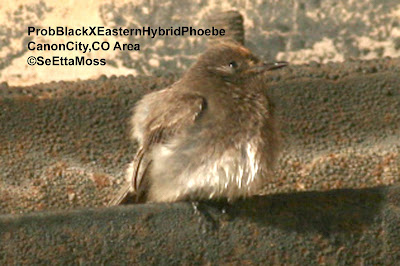 Here are two more pics of that unusual hybrid phoebe I posted on below. Unfortunately it was fairly shy so I was unable to get any pics in better light or closer view for more details. SeEtta 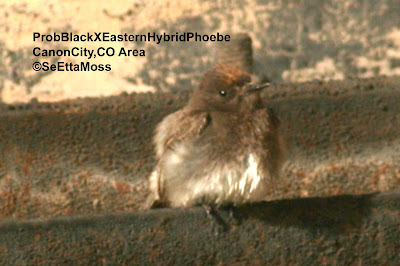 I found this probable Black/Eastern Phoebe hybrid today at my friend's in the Canon City,CO area. It has bright brown, almost rust colored, forehead feathers. The dark body feathers are from dark brown to charcoal and it has a breast dark on the top and white beneath, separated by an inverted 'v' found in Black Phoebes (as it's feathers were ruffled in the pics, I cannot tell how close to a 'v' this is).
Again not possible to tell for sure but it looks like it is undergoing a molt of some side and back feathers. It called only once, a 'tseep' that sounded like a Black Phoebe. It interacted briefly with another phoebe (probably a Black Phoebe but I didn't see it good enough to rule out another hybrid) in an neutral manner. SeEtta
Post a Comment
Read more
More posts