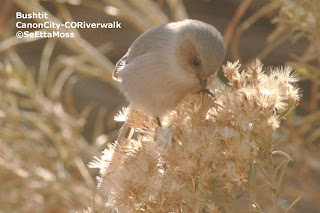 These two Bushtits have dark eyes which are features of males. The one in the top pic is pulling off seeds from rabbit brush, which is a versatile native plant that provides flowers in early fall for butterflies then as they leave the flowers are gone and the seeds appear just in time for several bird species including White-crowned Sparrows. SeEtta 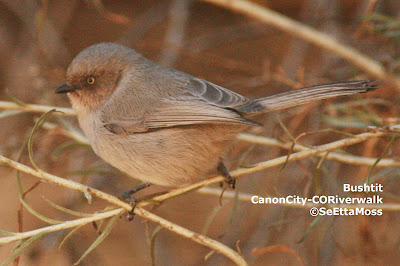 Bushtits are one of my favorite birds and these are foraging on one of my favorite native shrubs-rabittbrush. Though so nondescript in appearance they are such cute little birds that I see all but the most diehard lister light up when they hear their chittering calls. However they are almost always very busy foraging, often upside down, that they can be challenging to photograph without the blur of movement. This flock has been around the east end of the Canon City Riverwalk off and on for several days. These two Bushtits are females as they have yellow eyes. There is brown plumage around ear coverts forming a mask that is found on the subspecies P. m. plumbeus However, Birds of North America online says, "it is now clear that the amount of black in the face is a polymorphism, the frequency of which varies geographically." SeEtta 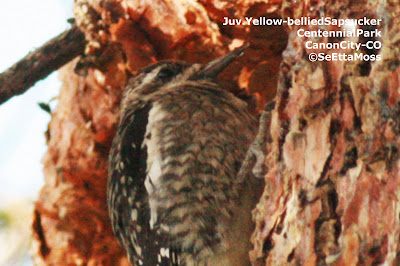 Yesterday I found this juvenile Yellow-bellied Sapsucker at Centennial Park in Canon City,CO. I have been seeing fresh sap wells in the pine trees in this traditional sapsucker wintering park for over a week but had not seen it in there. I spotted it about 50 feet up a large deciduous tree before flew into the pine on which it is drilling in this pic. Unlike adult birds, this sapsucker has very little red in it's crown.
Red-naped Sapsuckers have already molted into the head pattern of adult birds by the end of September so there is no issue with separating these from Yellow-bellied Sapsuckers. This bird has a white throat while a Red-naped female would have only half white and the bottom half red but I would not call this a female Yellow-bellied as I watched as birds with white throats molt into the fully red throat of a male bird. It's dark feathers are more black than brown as it is far along in the transition to adult plumage which will be basically completed in the n…
Post a Comment
Read more 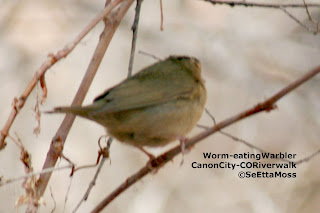 I was surprised to refind the Worm-eating Warbler, that I found a week ago today, along the eastern section of the Canon City Riverwalk this morning. It behaved most shyly, flying off out of sight when it saw me 40 feet away looking at it. I found it again 3 more times and it flew out of sight as soon as I got within 40 or so feet away. I was also surprised to see a Canyon Towhee in the same area as this is a pretty uncommon species in this riparian area. The photo above shows the rather olive colored upperparts and buffy sides found on all ages of this species. A close look shows just a bit of the dark head stripes. SeEtta
Post a Comment
Read more
More posts