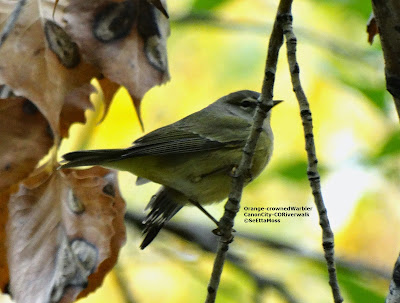 I did not notice how this warbler is holding it's left wing so far down as these birds were flitting about quickly. I hope it doesn't have an injured wing as this would be a problem for it's migrating. I watched well over a dozen Orange-crowned Warblers busily foraging in a mixed flock along the Canon City Riverwalk today. Actually it was at 1:30 in the afternoon when I decided to take a walk there during an interlude in the drizzly weather. I suspect the big rains we had yesterday (I got a total of about 1.25 inches at my place these 2 days) had brought them down and now they were fueling up for the rest of their migration. Most vocal in the flock were several Black-capped Chickadees but several Brown Creepers were also vocalizing. Also in the flock were a few Ruby-crowned Kinglets, a couple of Mountain Chickadees, 2 White-breasted Nuthatches and several Downy Woodpeckers. SeEtta
Post a Comment
Read more 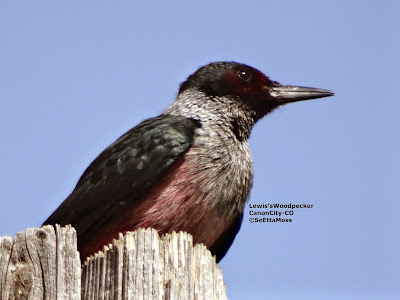 A few days ago I found a number of Lewis's Woodpeckers at my friend's property east of Canon City as well as near a local orchard. This is the first I have seen of this species since before breeding when they become secretive.
They were quite playful today, chasing and pestering each other.
They were also caching food for the winter in crevices of telephone poles. That is concerning since these poles have been dipped in strong chemicals to protect them from insects and water damage and I cannot help but wonder what those chemicals do to these birds whose beaks come in contact with the wood repeatedly.
The pic above shows one in flight-they look almost like miniature hawks when they fly. SeEtta
Post a Comment
Read more

Orbweaver spider in my yard-this one a "Cat-faced Orbweaver" 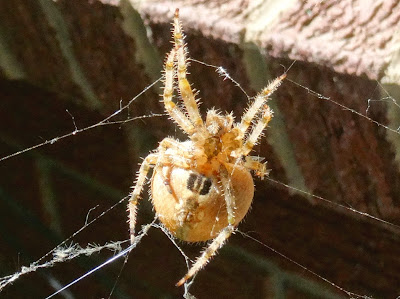 I found this neat looking orbweaver spider in my yard today. Eric Eaton, our local insect guru told me it is a "Cat-faced Orbweaver," Araneus gemmoides. It was striking to see how fast it could retreat to the safety of a shrub when I accidentally tweaked it's web. SeEtta
Post a Comment
Read more 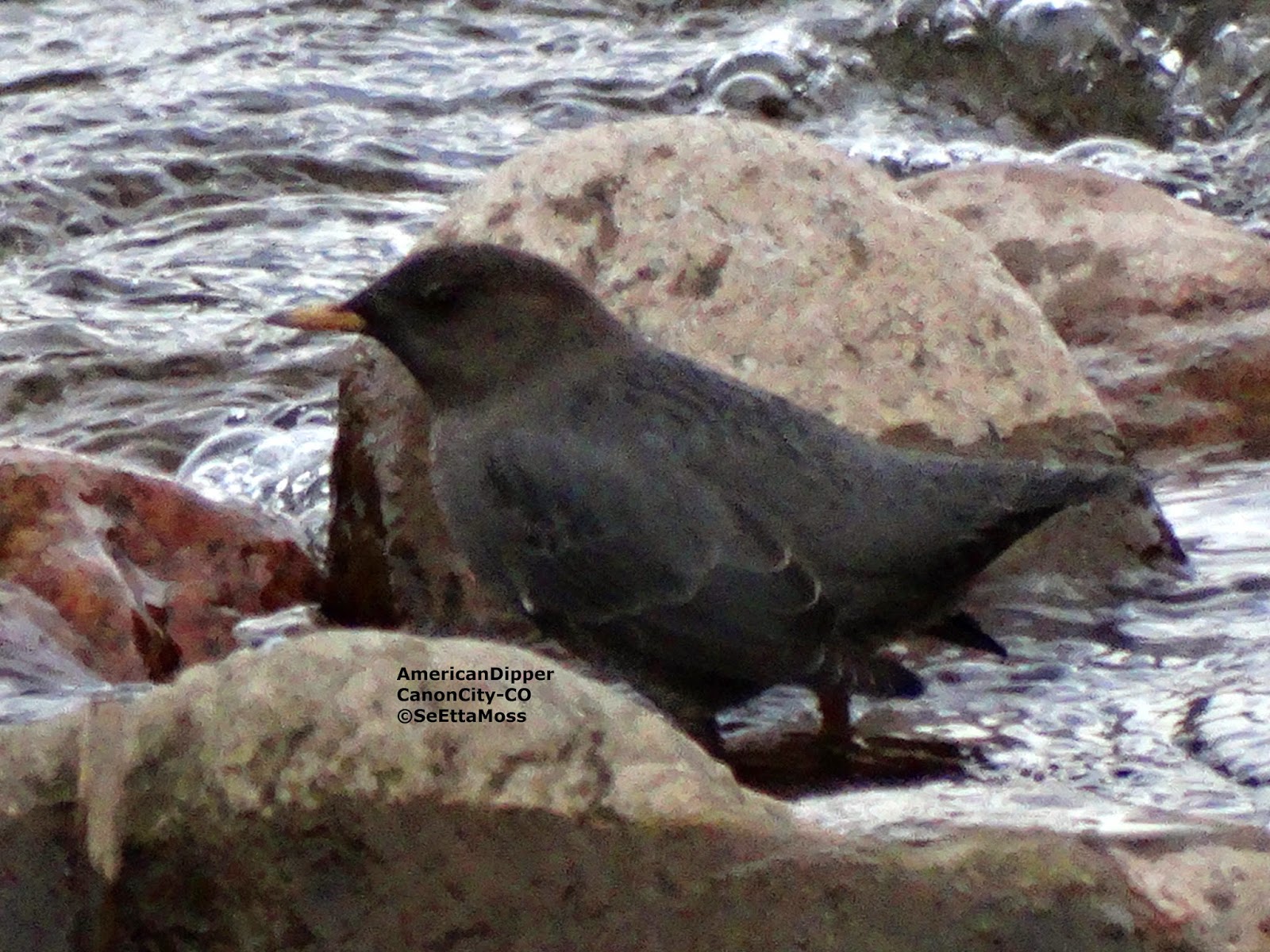 American Dippers come down the Arkansas River as it runs through Canon City, usually arriving in the fall and spending the winter. I have also for the past several years had 1-2 American Dippers stay for at least most of the summer with a pair with an aborted nesting effort a few years ago (racoons got into nest and presumably ate eggs or nestlings). This one was at west end of Riverwalk. SeEtta 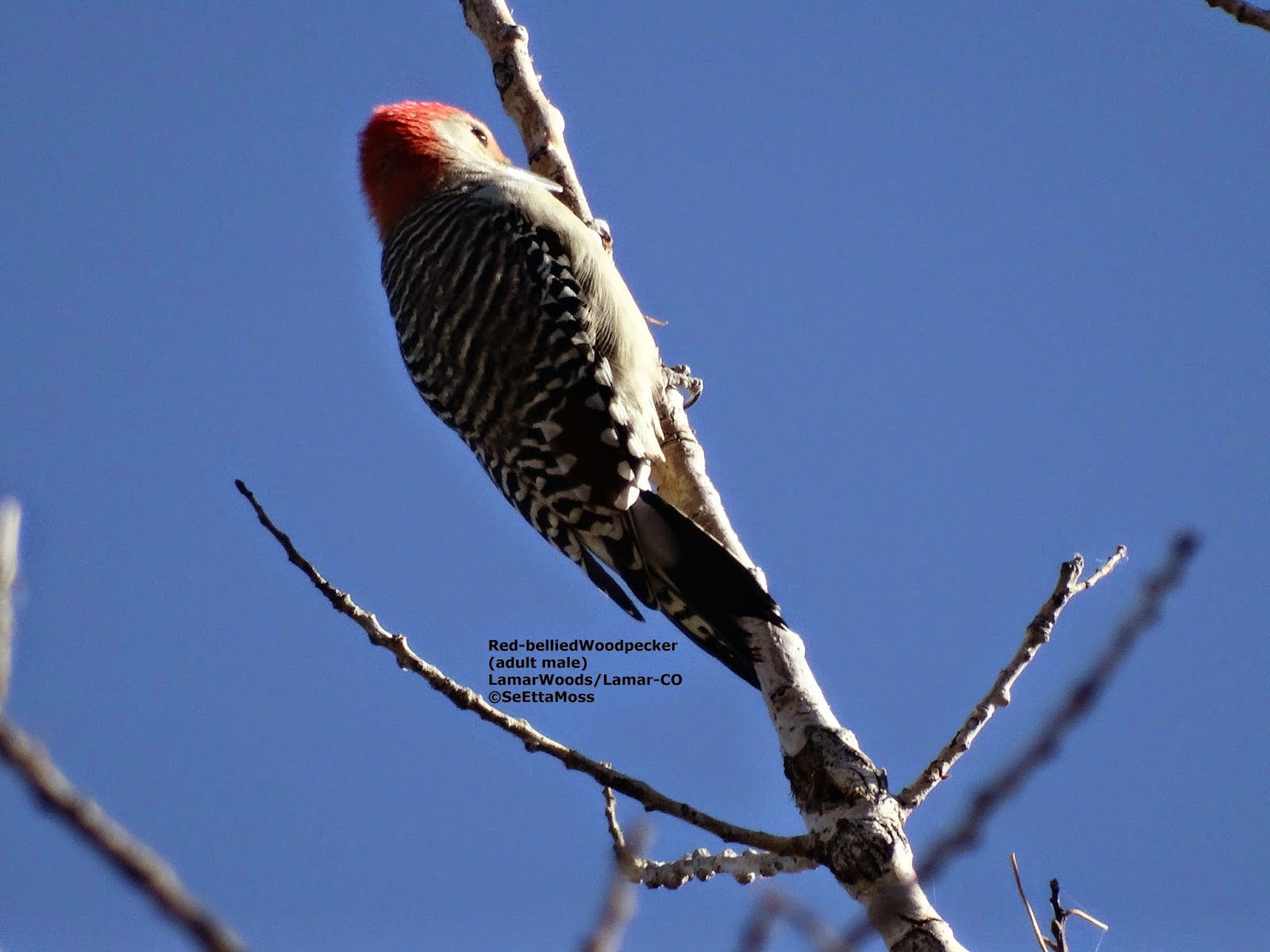 Far eastern Colorado is on the western edge of the range for Red-bellied Woodpeckers and probably the most reliable spot to find one is at Lamar Woods in Lamar,Colo. Though resident in this small wooded area they are not always out and about to be seen. This morning I found two of them that had been interacting but the other bird flew off before I could tell it's gender. SeEtta