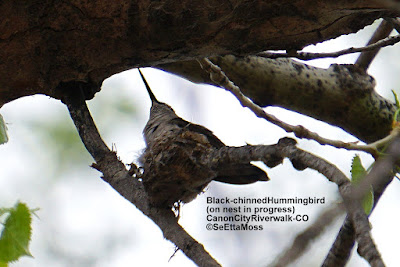 This hummingbird was spotted yesterday on a Forest Service/Arkansas Valley Audubon Society field trip to the Canon City Riverwalk. She is sitting on her partially completed nest in the pics. The nest is 25-30 feet above a parking lot for the Riverwalk trail system.B The pic below is the original photo that I cropped heavily to produce the pic just above. SeEtta
Post a Comment
Read more 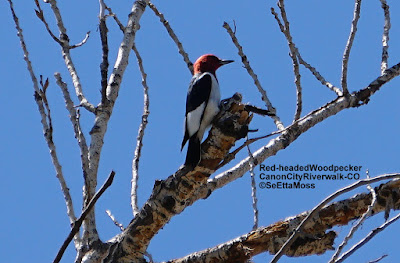 Back home now and I found this Red-headed Woodpecker on our Riverwalk. This is a rare bird for this county with only one prior record of this species here.
This species provides nice opportunities for in flight pics when they sally out to catch a flying insect. SeEtta

Least Bittern and one of it's chicks at SPI 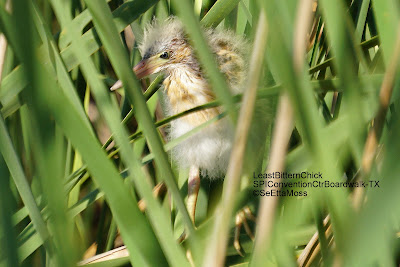 This was one of the highlights of my visit as was so neat to see a Least Bittern chick. While I actually have seen one, and even photographed it, once and here in Colorado it was not the best view. It is always challenging to observe and especially photograph these little guys as they are surrounding by reeds. I also got to see one of the parents when it was out likely hunting for food for the chicks (there were 3 reported). SeEtta
Post a Comment
Read more 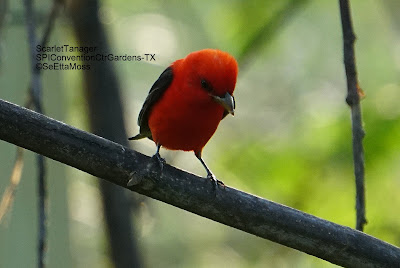 Series of Cape May Warbler pics, including a fight scene 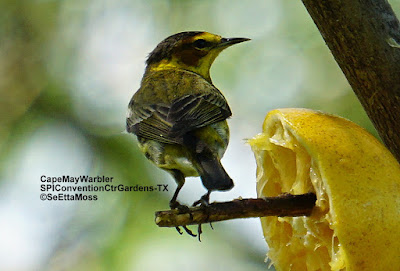 I participated in the South Padre Island Convention Center Big Sit, my first. One of the neat things during the 7 hours I stayed there (Scarlet Colley, who organized the Big Sit, and Elizabeth Cavazos, were there for 15 hours) was this Cape May Warbler. Not only was this a lifer for me but this bird was apparently very, very hungry as it returned again and again and again for hours to feast on the orange halves provided for migrants during not just the Big Sit but all spring migration.
Don't know if it was an unusually aggressive or territorial warbler, or just starving so not wanting other warblers sharing the oranges but it fought with every other warbler that came near. This second shot shows the Cape May in a brief battle with a Tennessee Warbler. This also offers a difficult to see view of it's white wing coverts opened fully, as well as it's yellow rump.
So I got observe this bird off and on for hours, and I got a number of pics of the bird.
Interestingly t…
Post a Comment
Read more 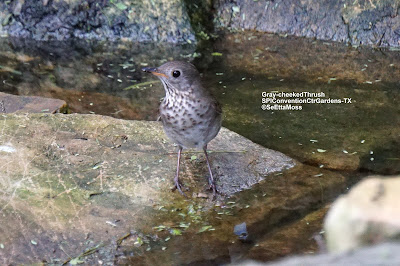 Though not as colorful as some of the migrating birds, Gray-cheeked Thrush is a real treat for most of us since they nest in Alaska and arctic areas of Canada.

I have seen this species at least once in far southeastern Lamar, Colorado but not such good looks as here. This one was actually cooperative, out in the open.
While some more eastern folks are fortunate to have Red-eyed Vireos breeding in their area many of us see them mostly on migration.
We actually get this species in the spring in my town in south central Colorado but I usually see them from underneath as they sing from a tree above me so I enjoyed getting a number of good pics of this one. SeEtta 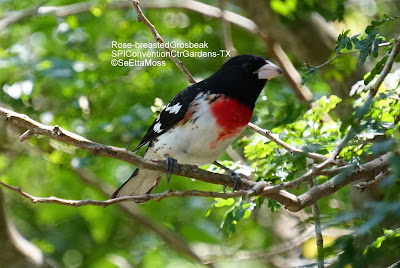 Another male Rose-breasted Grosbeak stopped over at the South Padre Island Convention Center gardens to feed.

Western Tanagers are not very common here so this adult male was very popular. I live near where they breed so see a number of them every year either migrating through my town or on their breeding territories, but they are always a delight.
This female Western Tanager was confusing to many of the eastern birders. SeEtta