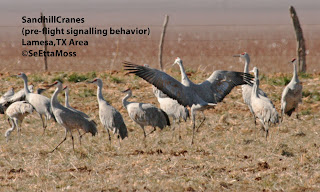 The very top pic shows a crane beginning a leap up while flapping it's wings. Though often associated with dances of breeding behavior, Birds Of North America online explains that this is a signaling behavior given by birds intending to take off to other family members. 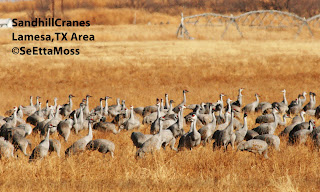 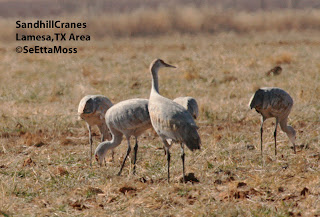 Both this video clip (they are pretty distant in the clip) and bottom pic (it is best to double click on the pic to see the extent of the view captured by that wide angle shot) show many of the Sandhill Cranes that were foraging in tilled agricultural (presumably cotton as most I saw were) fields adjacent to H87 north of Big Spring and south of Lamesa in west Texas. These cranes extended for over a mile along the highway, most on the west side but a few hundred on the east side. That was a pretty cool distraction from the otherwise not very stimulating drive between these two towns. SeEtta