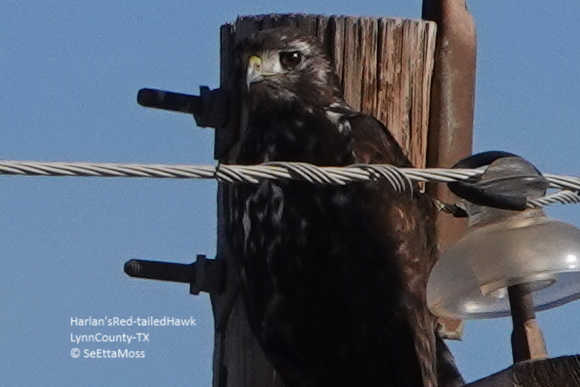 As I was driving north on the way back to Colorado I spotted this Harlan's Hawk perched right next to H87 a little north of O'Donnell, TX over the week-end. As I was driving the 75 mph speed limit I had to make a turn several hundred yards down the highway and go back to confirm it. Like most other Harlan's Hawks I have observed it was extremely sensitive to being looked at and photographed so even though I stopped on the shoulder of the other side of this divided 4 lane highway it took off before I could take any photos. It did just fly to the next utility pole so I carefully followed and stopped even further back to get the photos which I took from inside my car so even though I took the pics at 600mm I still had to crop them severely to get these pics. 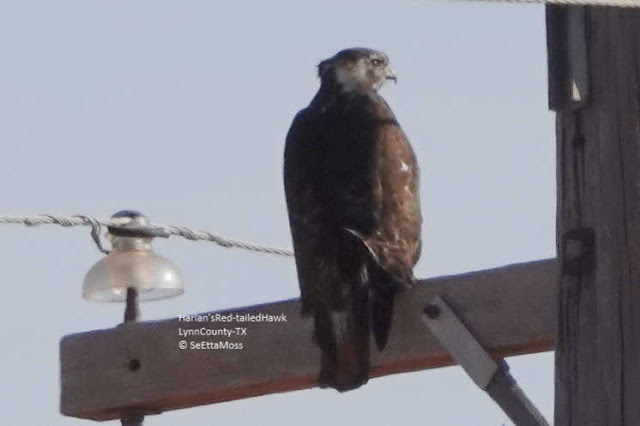 Harlan's characteristics on this hawk include: a white streaked throat and breast on very dark feathers with white lores, white supercilium plus additional and fairly extensive white on it's head. In keeping with the amazing variation of tail feather coloration this hawk has a reddish tail with white basal feathers. 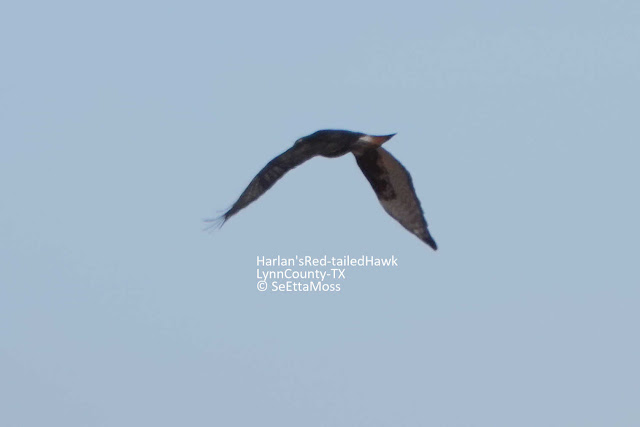 I checked for other Harlan's sightings in the area and found that Justin Bosler reported on Ebird 3 sightings in January, 2018 not many miles north of this bird, one a juvenile and the one adult with a photo was a different hawk. However a Harlan's report on Ebird in December, 2017 by Richard Hermasillo had a photo that looks like it is the same hawk as this one. There are not a lot of Ebird reports in the area but this may be a function of the low population there. SeEtta
DarkMorphHarlan'sHawk Harlan'sRed-tailedHawk WestTexas