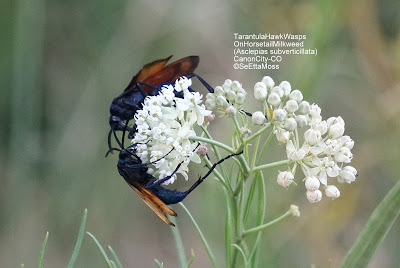 I found a bunch of this native Horsetail Milkweed (Asclepias subverticillata) in the far west part of Canon City. While Horsetail Milkweed is listed as native in Colorado the 'Floristic Synthesis of North America' lists it as a 'Native Species, but adventive in state.' Had to look that up--'adventive species' refers to "a species that has arrived in a new locality" which may have been with help of people or it may not (ie, range expansion). As a native milkweed it is an important plant for Monarch Butterflies as well as other insects. 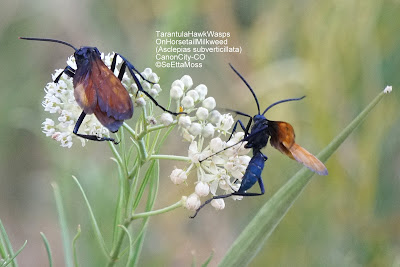 These Tarantula Hawk Wasps (Pepsis sp., Pompilidae) are some of the largest insects in the U.S. "When a female is ready to lay her eggs, she seeks out a tarantula and injects it with paralyzing venom. She drags the tarantula to a burrow and stuffs it down the hole, then lays her eggs on top of the paralyzed spider. Several days later the eggs hatch and the larvae feed on the still living tarantula." (http://www.statesymbolsusa.org/symbol-official-item/new-mexico/state-insect/tarantula-hawk-wasp) And they are the New Mexico State Insect (??). SeEtta 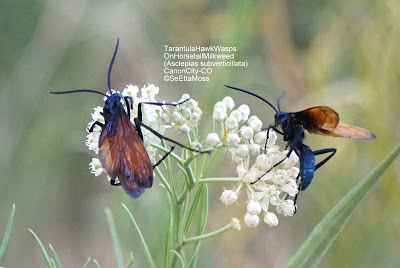