Zone-tailed Hawk, perched in the rain 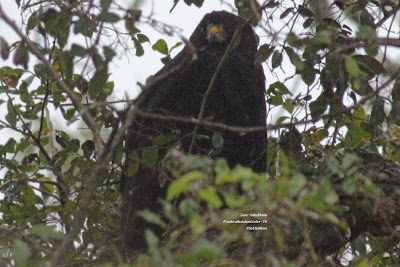 I didn't get over to Frontera Audubon in Weslaco yesterday (Jan 3) because I was participating in the Bentsen Christmas Bird Count on the west side of the Lower Rio Grande Valley. Today it was raining but I thought I would give it a try since I expected that most hawks would be perching. Boy oh boy, almost all the vultures were perching and often hunched over so it made scanning them for the Zone-tailed Hawk more challenging. After looking unsuccessfully for about a half hour I left and drove over to Estero Llano Grande which is only about 5-10 minutes away. I returned to Frontera after I left Estero to do another check for one of the Zone-tailed Hawks. It only took a few minutes for me to spot it in a deciduous tree, one with lots of leaves so it was very difficult to see it's field marks and to photograph it without approaching closer and I did not want to flush it especially on such an awful day for hawks, vultures, etc. So I did not see it's tail. I saw the limited amount of white around it's face that I saw with the adult and I did not see the white on it's breast (tho I did not see this when I first saw the juvenile) or nape that I saw on the juvenile. So I think this is the adult Zone-tailed, though with the caveat of only a 'likely' adult. The photo can be enlarged by clicking on it to see the facial features but the quality degrades. (note: I had checked the tree I found it in during my first checked; and after finding I left and returned 45 min later and it was gone again.) SeEtta
FronteraAudubonCenter Weslaco-TX Zone-tailedHawk