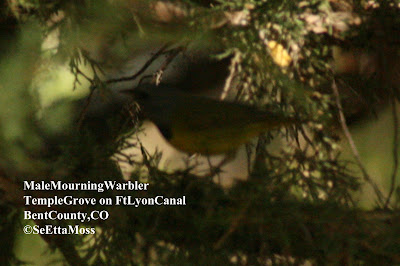 This morning I birded at a super neotropical migrant trap called Temple Grove. This is a unusual nice grove of trees and shrubs extending for close to a half mile along the Ft Lyon Canal--as this canal moves water to agricultural areas from the Arkansas River it is unusual to see such extensive vegetation as the canal companies routinely remove both native and non-native trees and shrubs to reduce water 'lost' to them. 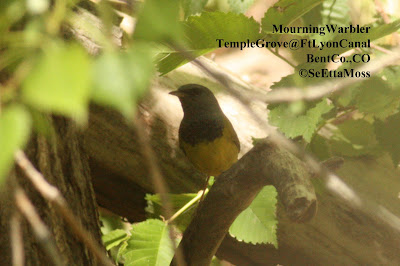 I first spotted this bird this morning but only had a very brief look, too brief to call such a rarity (and life bird for me). I didn't refind it until after lunch. Though I got the top pic at that time, I couldn't tell if it was good enough to show field marks in the small lcd screen on my camera so I kept looking and refound him a second time at almost 2 pm when I got the bottom pic and two more posted next. I have not edited these pics in order to preserve the coloration and shading though they are pretty dark (this species likes dense vegetation and it was pretty dark where I photographed it) SeEtta
MourningWarbler TempleGrove-CO