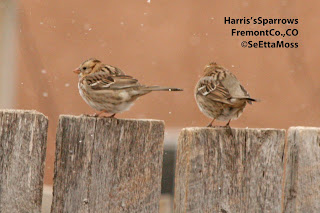 Today I refound the pair of immature Harris's Sparrows I originally found about 6 weeks ago. I have looked for them on several occasions since first finding them but had not seen them again until today. The two immature birds fed and stayed together just as they did when I first watched them--apparently siblings that have migrated to Fremont County from their northern Canada where this species breeds. 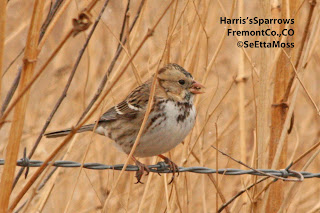 They are unusual as they are not apparently going to a feeder where most Harris's Sparrows are found in Colorado. They are in a rural area where I don't believe anyone feeds birds, but near cattle feeding. I spotted the bird in the top pic eating a seed at the side of the road where the two were feeding on weeds. 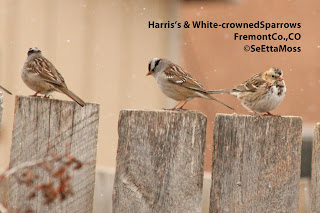 I have found the Harris's Sparrows in association with White-crowned Sparrows, members of the same sparrow family. By the way, the flecks in these pics are snow flakes--the snow was coming down at a pretty good clip. SeEtta
FremontCo-CO HarrisSparrows