More from trip home thru Texas 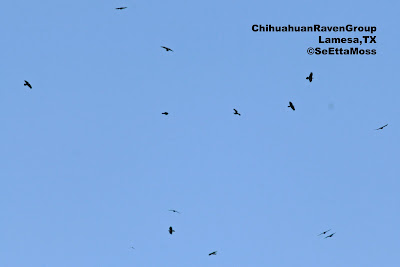 My posting got interrupted by the Snowy Owl and I didn't get to finish posting about some of my birding on my way home as drove through West Texas and the Panhandle. I didn't get any post-able pics of a neat spectacle I saw in small town in West Texas--many hundreds of Chihuahuan Ravens. I first observed numbers of Chihuahuan Ravens feeding in a just-plowed ag field. When the farmer drove his tractor back towards them, the ravens started lifting off with many more coming from behind vegetation and others from the trees surrounding the field. They formed into 2 separate "kettles" and flew in apparent thermals around and around as they lifted higher--I was amazed as there were more than 500 ravens in total. As the kettles rose several hundred feet up, first one then the other kettle flew off each in a different direction. The above pic shows some of the ravens in a kettle--I just haven't mastered the technique necessary to get good pics of kettles be they ravens or hawks (any suggestions will be welcomed). I looked for signs of the ravens as I continued my drive north but they were long gone. 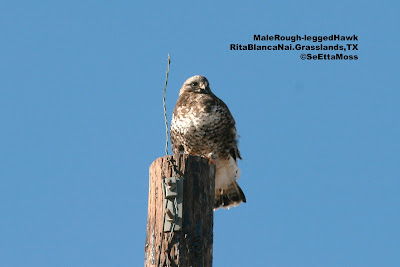 I saw many Ferruginous and Red-tailed Hawks in West Texas and in the Texas Panhandle and a few Rough-legged Hawks including this male I photographed in the Santa Rita Grasslands in the far nw corner of the state. Double-click on this pic for a closer view of his brilliant eyes. 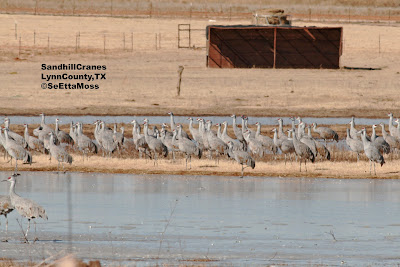 The Sandhill Cranes in the bottom pic were part of a flock of 150 or more that I spotted in a pond not far off the highway. I saw several other flocks near the highway which made the drive more interesting. SeEtta
ChihuahuanRavens Rough-leggedHawk TexasPanhandle WestTexas