- October 23, 2009
Yesterday morning I found a small group of at least 3 and possibly 4 Rufous-crowned Sparrows, a specialty species that was found in the Tunnel Drive area of Canon City on a Christmas Bird Count about 10 years ago. Though this species is not known to migrate, we only see this species from around October through April or so. (I suspect they move higher up in the canyon gulches common to the Tunnel Drive area to breed, but that is only speculation.) So these were the first of the season birds here. I thought the bottom pic was quite interesting--I caught the bird as it flew down on a big rock though it looked more like jumping down with a little wing assist. Features can be seen up close by double-clicking on each pic but be aware the quality of pic deteriorates (hey, these photos were taken at more than 75 feet and the camera was handheld) 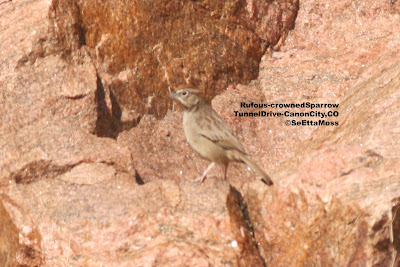 Interestingly, in my experience these sparrows are almost always found in the company of some of the many Canyon Towhees that inhabit the shrub and pinyon-juniper studded rocky hills that are at the mouth of the Royal Gorge canyon. From what I have read, they are often in small family groups for an unknown period of time after breeding so I suspect the birds I saw, which were in fairly close proximity, were likely a family group. 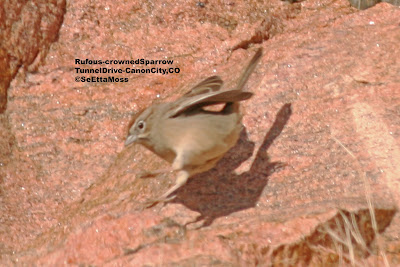 One of the sparrows had rather dull, indistinct markings. I suspect it is a sub-adult Rufous-crowned Sparrow, possibly transtioning from juvenal to Basic I/first fall plumage. See next post. SeEtta
Rufous-crownedSparrows TunnelDrive-CanonCity-CO